GAMES FROM THIS EPISODE OF AVGN:
–Superman (N64) (also seen in this episode, but it was not chosen)
-Superman (Commodore 64)

If you asked someone to pick an AVGN game that he’s known for, or perhaps which game he was most requested, I’d be willing to guess that Superman on the N64 (commonly known as, and henceforth referred to as, Superman 64) is the most likely example.  I mean, it’s that bad.  One of the most notoriously bad video games of all time, and it’s no question as to why: taking the gameplay completely out of the equation, you have ugly graphics full of pop-up and fog, stock and generic music and sound effects, and bland designs for enemies.  You do get a plethora of known characters from the show, but the main enemies are generic, shadowy villains called, well, dark shadows, that look like the creepy guy from the Neighborhood Watch signs.

But then, there’s the gameplay.  Oh, the gameplay… now, it’s buggier than Joe’s Apartment, but let’s discuss the intended gameplay.  Luckily, in the speedrun, we play the vast majority of the game on easy, so we don’t need to fly through hundreds of rings.  This saves time, and makes the flying levels much less stressful.  However, the level designs in the “overworld” are bland, generic filler.  The actual levels themselves aren’t bad, but they’re repetitive fetch quests.  Fortunately for speedrunners, this game is Glitch Gremlin’s best friend.  If you play Superman 64, you’re probably going to clip out of bounds on accident, the collision detection in this 1999 “classic” is so awful that many times I clipped OoB by mistake!  And of course, in the run, when we do it in the right place we can abuse this; whenever it happens suddenly you’re never ready for it, and that’s basically the end of your run!  Not to mention, getting launched higher than a building by a rocket, stuck to sides of walls, flung forward like a slingshot, and fusing into items… being juggled by enemy fire… bosses are easier than they really should be.

And yet.. I enjoyed this speedrun? Or at least, 60% of it? (inside joke; the speedrun is faster if you use the in-game option to shrink the game window.  Top runners can do this at 20%, which is extremely small and hard… giggity).

I kind of did, to be quite honest.  Not saying this game is good, but when you “master” the techniques and strategies the speedrun asks for, it’s actually quite precise and technical.  Pulling off the out-of-bounds clips is a blast, and when you finally let things click, it’s very satisfying.  This game DESPERATELY needs a tutorial, but the folks that ran this before I did helped a lot.  That being said, I put a lot of time into learning these clips from watching others’ runs, and that’s pretty much how this trial went.  Hard to learn, crappy game… still had a blast!  I recommend it to anyone that knows how to speedrun janky games, isn’t afraid of major glitches and softlocks, and has time and patience. 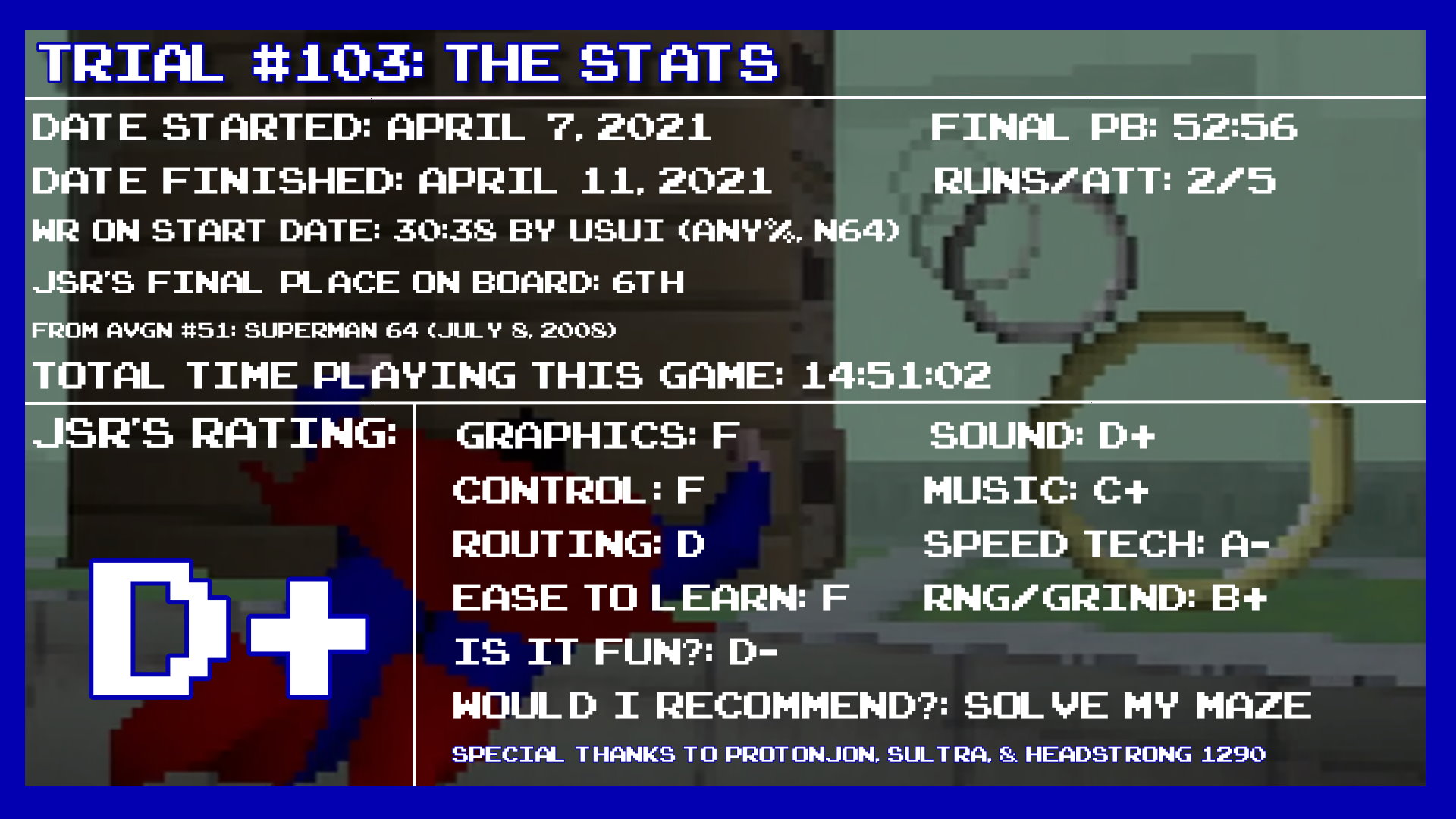