Some games are full of memes.  Jokes.  Humor.  Sometimes, the laughs write themselves.  And yes, let’s just get it out of the way: Michael Jackson’s Moonwalker could be called “Meme: The Video Game” at first glance.  The AVGN said it much better than I ever could, so instead I’ll just say this: this game came out WAY before MJ was ever considered anything more than the biggest star on the planet, and I’ll reserve judgment for those that wish to judge; this game is a blast to play with amazing… well, almost everything!

This was an early Sega Genesis (Mega Drive) game in the US, and it does kind of show.  The graphics are simple, albeit colorful and vibrant.  The motion capture they used to capture Michael Jackson’s dance moves and attacks came out so good.  As you learn the little tricks and Easter eggs the developers at Sega hid in this game, you begin moving with a pizzazz and swagger you rarely see in 2D classic video games.  This game is so unique, and believe it or not, this game holds up today; in fact, I’d say it’s even better today than it ever was back in the day.  The music is chiptune at its’ finest, and each MJ song sounds just like it does on the album (in chiptune form, of course).

The one place this game hurts is the controls and the relatively repetitive gameplay, but these are nitpicks and not major gripes.  You will get used to the controls here with a little time, and once you do they fit like a, well, glove.  You will still miss the occasional jumps, and accidentally over-attack in boss fights (which sets you up for a sad fall if you run low on energy, this game is unfair when it comes to your low-health attacks).  You must rescue kids in this game (yes, rescue ConcernFroge) and that goal gets old by the 2nd stage.

That being said, each stage is unique and feels like a, well, Michael Jackson video game.  It’s so well done, and the speedrun emphasizes this perfectly.  You will dance (both in-game in in your chair), you will sing, and you will smile.

If you’re an MJ fan this speedrun is for you.  If you’re not… you still can do MUCH worse.  This is awesome and needs more shine (and perhaps a tutorial). 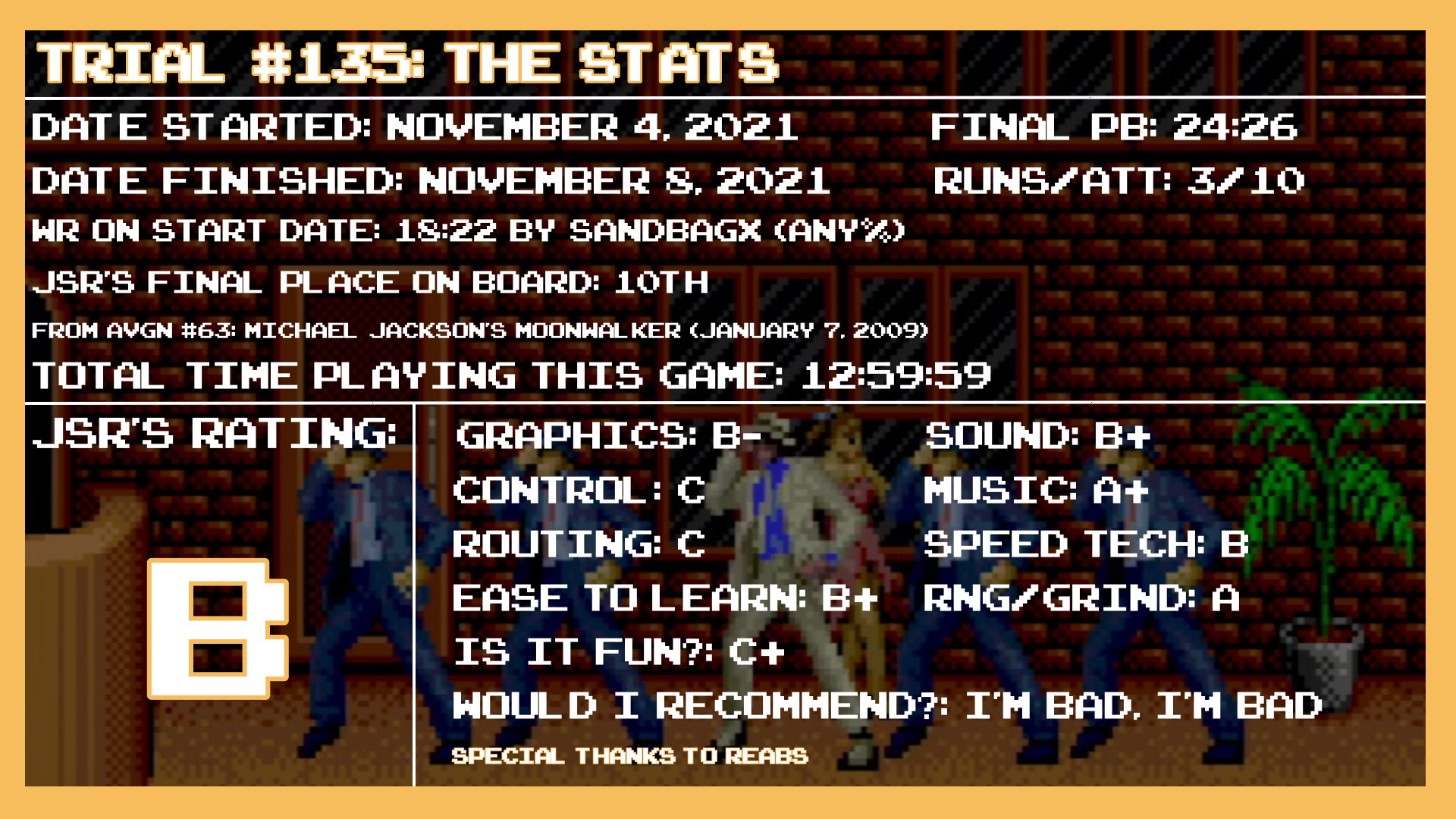