A common theme I’ve noticed with a good chunk of the games in the AVGN Trials is that I am afraid of them, yet once I pick them up, I discover that, beneath the layers of notoriety and difficulty that most games offer players in casual settings, lies a speedgame that is fun, has tons of options, safeties, and more, and is challenging enough to not be a drain or a burden, yet difficult enough to be satisfying.  Milon’s Secret Castle falls just shy of being a classic or a gem, yet is MUCH better than its’ reputation suggests.

This game is hard, let’s not kid ourselves, and the biggest issue with this game is certainly the game’s controls.  At least… it is on the surface.  Milon moves very sluggishly (if you’ve played Kid Kool, it’s very similar to the physics in that game), gaining momentum slowly and making jumps from a stand-still very challenging.  The levels are designed in large, grid-like 2D platforming/puzzle sections filled with infinitely-spawning enemies, and hidden items everywhere.  This, by the way, is the true weakness of this title, especially with casual players; this game is possibly the most cryptic video game on the NES, and that is saying something.  NOTHING is hinted at in-level, with only a few hints available from merchants, most of whom are ALSO hidden in the worlds that await Milon, our deaf hero in the world of music.

To get through the game, he must find hidden items and hidden money, some of which lies in hidden bonus levels, in order to buy hidden weapons and beat the hidden bosses.  Notice a trend here?  The hidden items are all invisible, with zero-to-no clues or giveaways to tell you where they hide.  You must use your bubbles to uncover the items and only THEN can you collect them.  That is not the only reason this game is notoriously difficult, however; you also have to deal with enemies that have few patterns, a limited health bar which can only be refilled either via shops, or by collecting heart drops from enemies, OR a hidden honeycomb powerup (which also adds a hit point to Milon’s meter).  To add insult to injury, Milon’s i-frames (the frames of invulnerability you gain when you take damage) are some of the shortest on the NES, with multiple instances of Milon being pinned or trapped and your health meter being melted like ice in Death Valley by the weakest of enemies.

Bosses are another story, and most of the above synopsis applies moreso to casual players than speedrunners; this hits both: they’re freaking hard!  There’s little patterns to be had, and it’s very easy to get yourself trapped and take multiple hits from the boss before you recover.  The many bees hidden in the world offer temporary shields, but once they are gone they’re gone, and it’s easy to get far into a run only to die to a boss due to a mistake or two.

That being said, this game is insanely fun.  This game is packed to the brim with hidden rooms, bonus levels, enemies, and solutions to puzzles that, even when you DO know the solutions to, are fun, challenging, and tricky to nail the first time, with enemies flying all over and the game’s janky movement holding you back.  The movement, by the way, gets much easier with time, and this game becomes more of a speed dance than a run (though you DO run a whole lot).  Dealing with note RNG in the minigames, random movement of enemies where you don’t expect it, and a rogue projectile hitting you at an inopportune time is something that you CAN do with some practice; this game becomes insanely fun to move around in. With bright graphics, nice music, and a ton of variety in the level layouts, this is a joy to speedrun.

This is not a speedrun for the faint of heart.  You won’t master this in a 12-hour challenge.  But, if you are willing to put in the time and effort required of you if you DO wish to master it, this game rewards you handsomely with a fun run (both for the runner, and the chat).  I recommend this only to hardcore NES runners, runners looking for a challenge, or players familiar with the game.  If this isn’t you, I suggest playing through it casually first before you try dipping your toes into either run (yes, there’s an any% and no, I aint crazy enough to try it LOL) 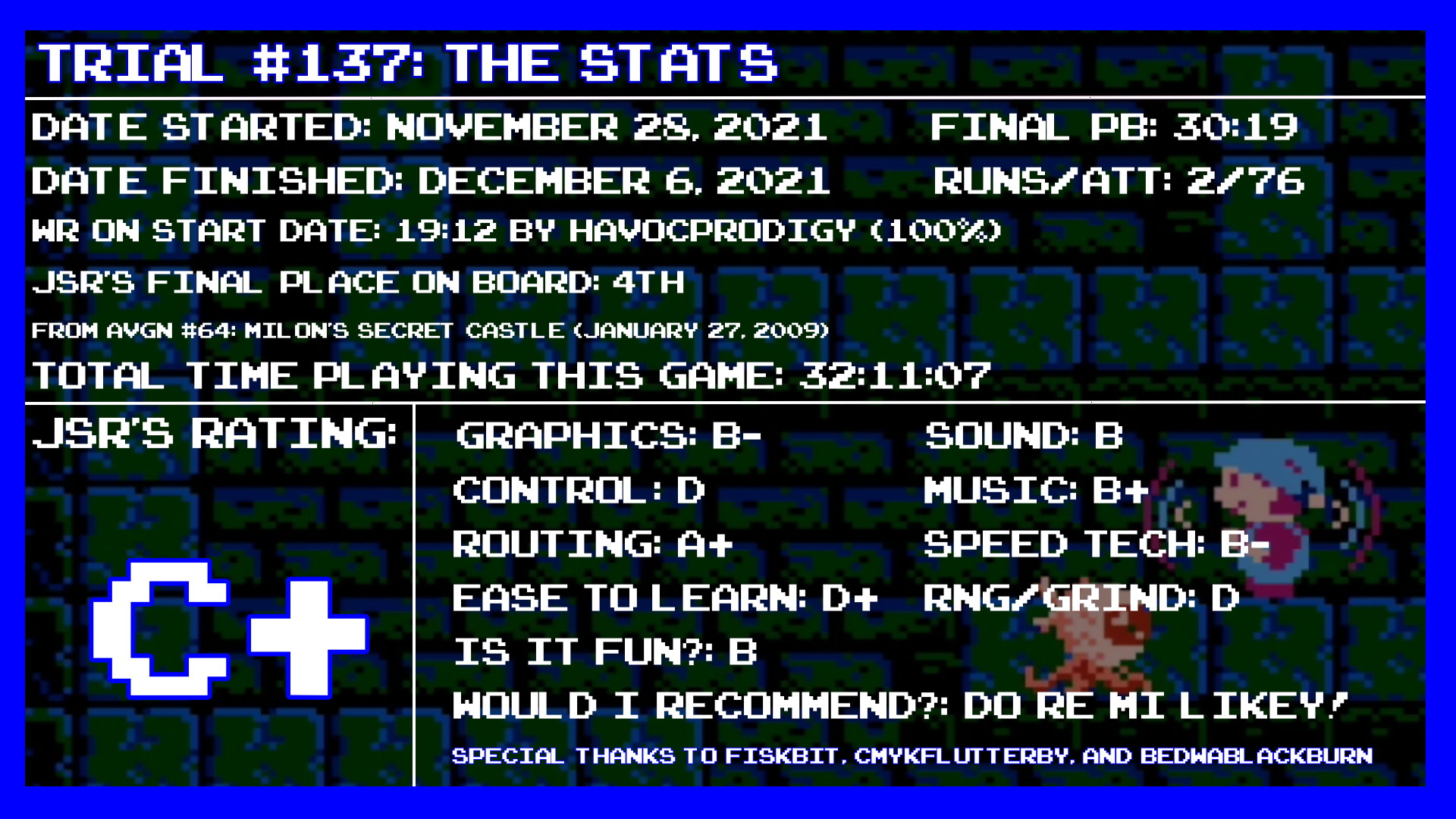