Kid Kool and the Quest for the Seven Wonder Herbs (1990, NES) by Vic Tokai

120 games into the Trials, and all the time I’m asked, “Which game are you most afraid off, going forward?”  The thing is, the games I feared early on always ended up not being that bad.  Games like Rocky and The Crow ended up being blips on the radar, whereas games like Independence Day and Polybius came out of nowhere, smacked me right in the scrotum, and then ran off to legend and infamy.  They were not anything I was concerned about, and then their turn would come up, and I would have instant regrets.  And now, you can kount Kid Kool in that group.  Fuck this game.

This is a game that has absolutely zero redeeming factors.  The graphics are awful and bland; the music is corny ice cream truck music.  The sound effects come from the Atari 2600.  The play design is atrocious; any vanilla retail game which has kaizo blocks in it should be considered a crime.  Like, what the living everfuck were Vic Tokai thinking?  This is without a doubt the most cruel and unfun video game I’ve ever played, and folks, I’ve speedrun Wally Bear and the NO! Gang.  The level design is bland and dumb, and the game has this atrocious vertical scrolling “feature” when Kid Kool (who looks NOTHING like the terrible 1980’s relic cover art, btw) goes above the screen.  I swear, the developers must have been pulling a practical joke; there’s no WAY they played this and said “yeah guys, it’s done!  Ship it!”

And the controls.  Yes, they get their own section.  Have you ever played a game with ice physics?  Now, add a momentum-based movement engine that requires you to get a running start to jump a gap just a few tiles wide.  Once you DO get that running start, Kid Kool moves almost as fast as Sonic the Hedgehog.  And THAT’S a HUGE problem, since this game has almost zero flat planes to run on without hazards to kill you.  This game is full of 1-tile gaps you can easily run across if you memorize the level layout, but if you stop a single time you are forced to make dozens of precision jumps with zero air control and jump correction, eaten inputs, and even some input lag.  You have a fuzzy fucknugget to throw as a weapon, and if you don’t have him and get hit, you die.  Yep.  1 hit point.  Kaizo blocks will kill you, the enemies will kill you, but more than any of them, YOU will kill you.

The bosses, meanwhile, are as uninspired as this game is in general.  They’re all the same.  Jump on the plunger, kill them, move on.  There’s almost zero challenge and absolutely zero variety.  This is the epitome of lazy, uninspired, cash-grabby bullshit game design.  The developers should have been sued for selling this.  This is EASILY one of the worst games in the AVGN Trials.  The speedrun is shit, the game is shit.  I dare you to play it.  But don’t say I didn’t warn you… 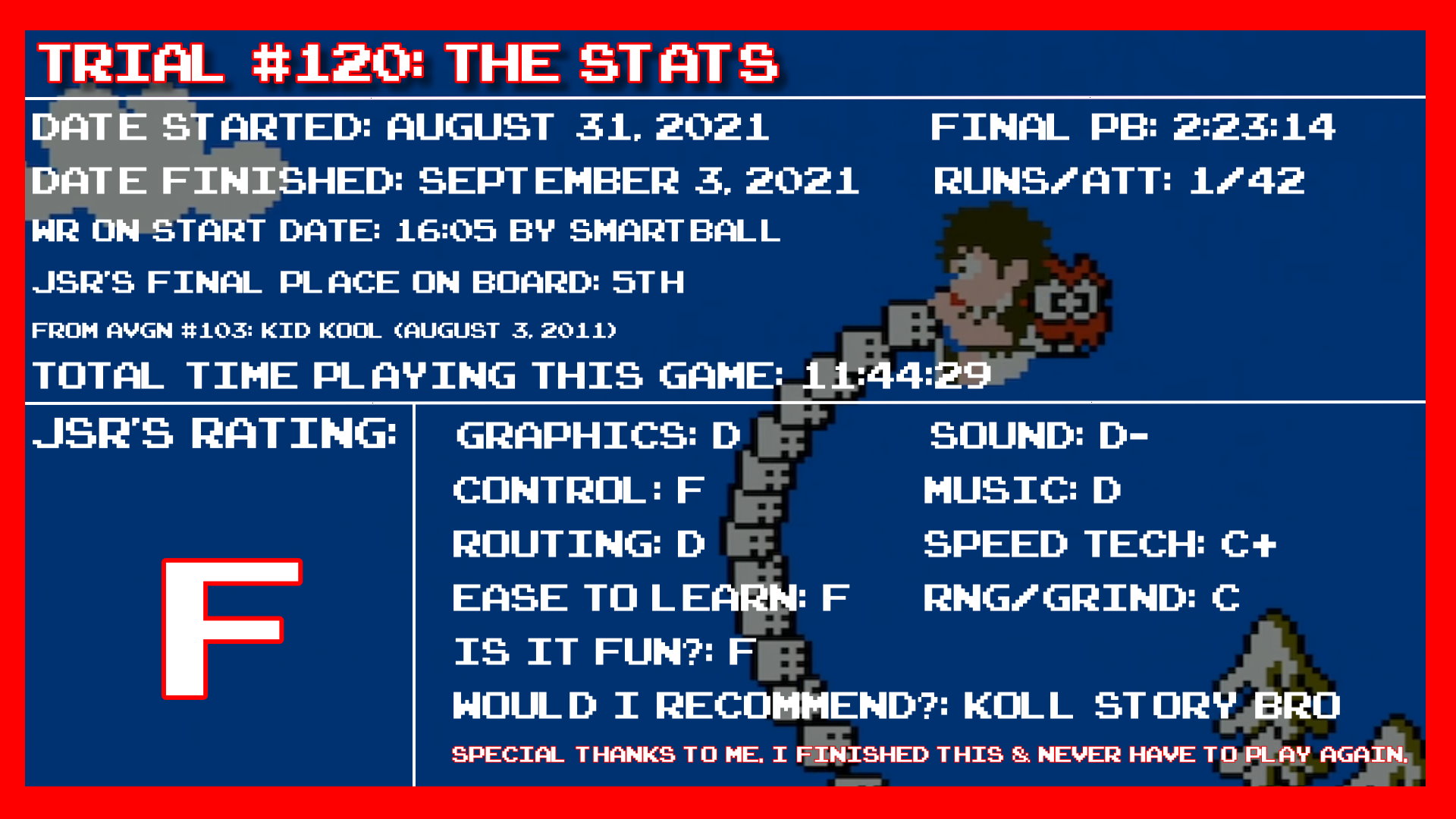