Big Rigs: Over the Road Racing (2003, PC) by GameMill Publishing

View the current “100%” leaderboard on speedrun.com

This is not a game.

A game has an objective.  You can win or lose a game.  There are goals, and enemies, opponents, or adversaries in some way in a game.  Games are usually structured and have rules.  Video games in particular are usually subjected to rigorous testing and bug-hunting before they’re released.  With budgets rivaling triple-A film studios, the games are released and usually do not claim falsehoods.

But Big Rigs doesn’t play by the rules.  They don’t do any of that.

I’ve played a lot of games in my day, and yes, this is by far the worst game I’ve ever played from an execution perspective (only Crazybus and Hong Kong ’97 compare) but this is not the worst game in terms of enjoyment I’ve ever played.  But before I even try to defend that statement, let’s get the bad, obvious stuff out of the way.

Big Rigs should be called Bug-Riddled. No collision detection, terrible A.I. where the damned opposing truck cannot win the race, typos, glitches, the infamous “ludicrous speed” glitch in reverse… not to mention that the box claims things that are not in the game (where did they get those screenshots?). Honestly, the people behind this game should’ve gone to freaking jail.  This is incredible that this game was even released.

As a speedrun, you look at games like this a bit differently.  The challenge of doing this quickly in reverse is the equivalent of playing Mario Kart on steroids.  You can’t see where you’re going, so you need to memorize enough of the track that you can kind of predict where to turn.  Luckily, the game allows you to skip a single checkpoint without punishment, so long as you always hit the very first and last ones, and you never skip more than one in a row.  Doing this in reverse, not being able to see, was one of the more challenging things I’ve had to master in the trials, and after getting the hang of it, I was having a blast!

This is actually a decently fun speedrun!  There are MANY games in the trials that are worse speedruns.  And, yes, they are better games at their core, but at the end of the day, the memes and spectacle of this game are oh-so-entertaining that Big Rigs actually blows them out of the water.  Give this a try if you dare, and you’re winner! 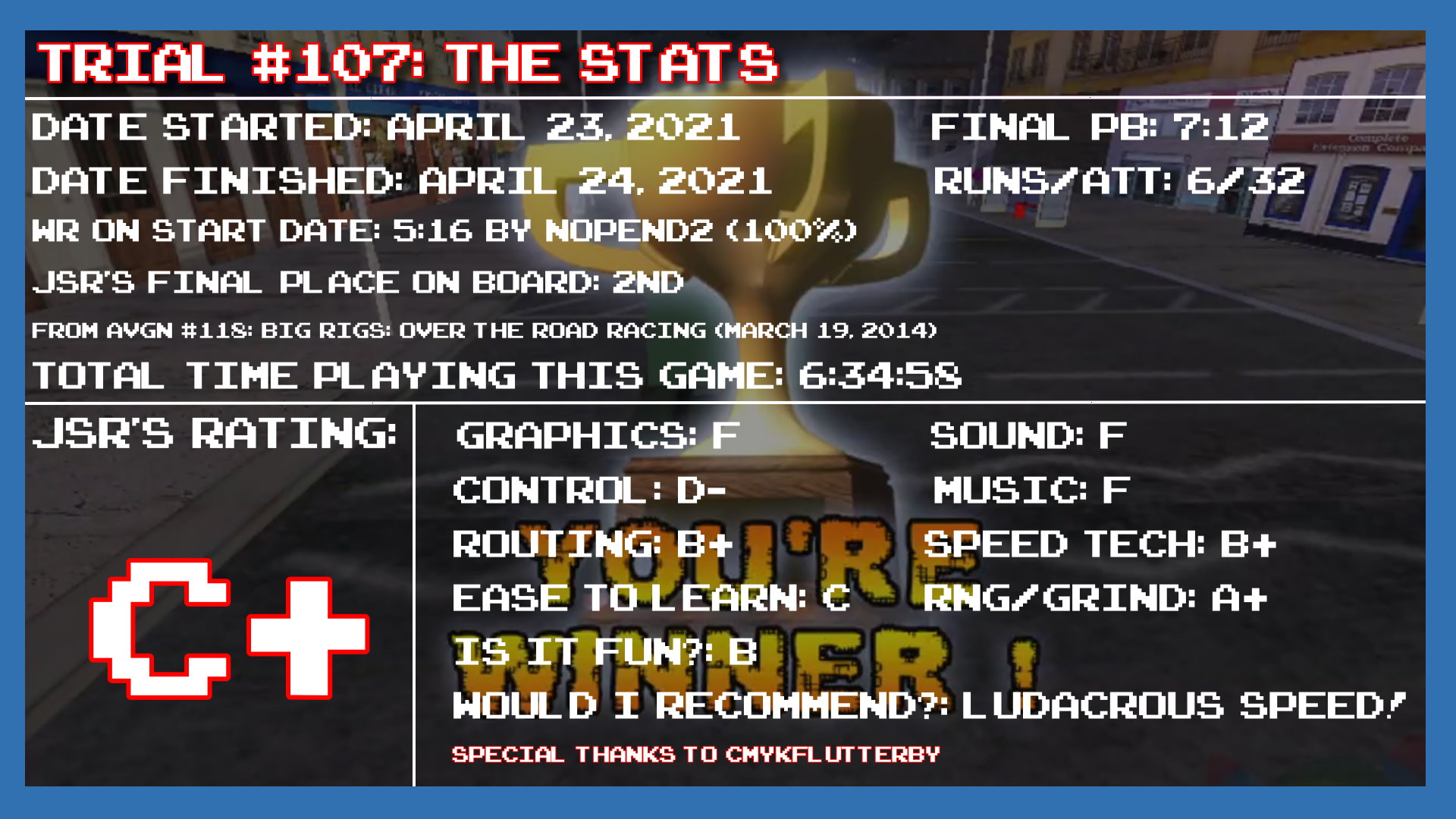 (yes, I misspelled ludicrous, get over it. I’m not re-doing that graphic for that)