The Crow: City of Angels (1997, PlayStation) by Acclaim

When I made the original list of 139 games, which was to be speedran in the year from June 2018 to June 2019, I have to admit, as confident as I was that I could do most of the games, there were a few in that list that outright terrified me.  But of all the games on that list, this game was easily the most terrifying.  And if you watch the AVGN episode it’s easy to see why: this game is atrocious!  Casually, The Crow: City of Angels is an ugly, awful-sounding mess that, as hard as it is to believe, plays even worse than it looks!  A beat-em-up with tank controls similar to Resident Evil (oh but MUCH much worse), unfair enemy spawns that use guns in a way where you’re helpless to just do anything except die, and no checkpoints between levels to speak of, this game made me think I would not be able to get this trial finished.

It didn’t happen in that year, of course, with me expanding the trials to 200 games, but here we are… and I still can’t believe it.  This game caused me so much anxiety over the years, even so much as to ruin the ending of my wildly-successful Darth VadSR_ stream in which I drew this title.  But when I sat down and played this game, I realized that this too could be conquered.  The enemy spawns are slightly predictable, and although some of them spawn with random guns and weapons, most of them are set in stone.  And though the game is unfair with damage, you can cheese your way through a lot of the fights with timely ducking, spinning roundhouse kicks, backflips, and guns of your own.

This is up there with the worst games I’ve ever played.  This is trash, straight up.  Without practice, guides, passwords, and the like, this is nearly unbeatable.  But I discovered once again, reinforcing my beliefs in myself, that any challenge can be conquered with hard work and determination (and save state practice!)

The run was nice, man. I had a shot at the record until the very end when an unlucky spawn took me out just before the final area.  Not much I could’ve done; it felt like yet another JSR choke, but it really was just bad luck.  The game beat me, I didn’t beat myself.  And the rest of the run was so good, I can’t be mad at anything or anyone, myself included.

Honestly… I almost had fun here.  But my relief outweighs anything else 2-to-1.  Long live The Crow in the bowels of my memory, the haunting Tommy Wiseau-esque cover, the pixelated garbage graphics, the tinny, MIDI-sounding music, the awful voice acting, the slippery controls, awful hit detection, unfair rocket launchers… I’ll see all of it in hell, and no I haven’t been there, so I won’t like it when I go. 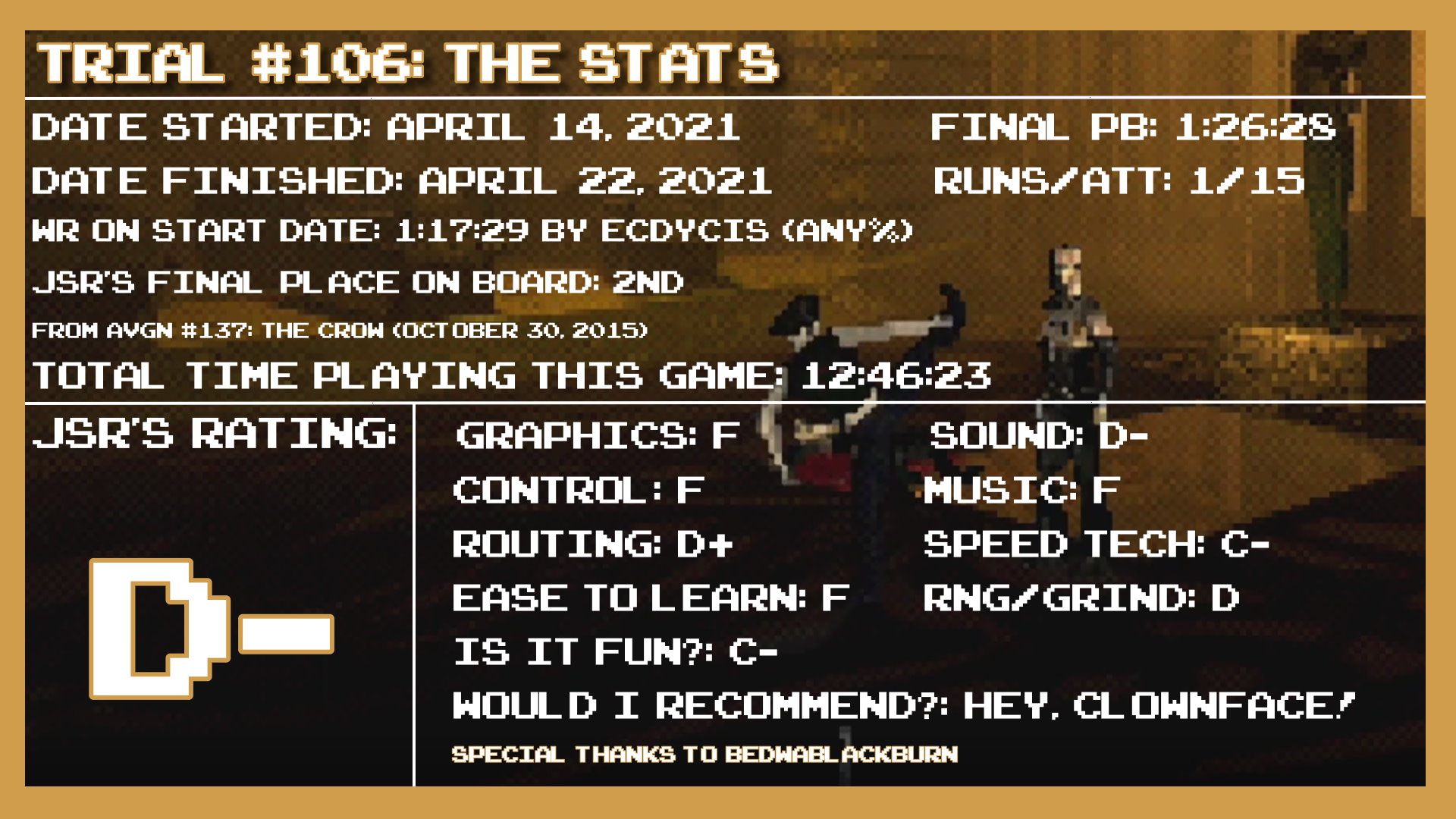