I had never really played Tomb Raider before this trial began. Of course, I did have a PlayStation 1 as a kid, which came with an awesome demo disc.  This disc had many games like Crash Bandicoot, Croc, F1 racing, Parappa the Rapper… and Tomb Raider, on it.  And honestly, the few times I tried Tomb Raider, I hated it.  The controls are like a bad version of the Resident Evil tank controls.  Lara turns slowly, has momentum, moves on a janky grid system, and of course this game expects you to move her like Mario in Super Mario 64.  The fall damage is brutal and unforgiving, and this game in general is extremely tough to get the hang of.  So, this trial must’ve been awful and horrible… right?

It was quite a learning curve I dealt with here.  The game took me a week to beat casually with a guide as it were (albeit in limited playtime, as I was knee-deep in building this very website at the exact same time).  Once I got through it a few times, I started noticing something…. the more I got used to Lara’s movement (and the actual routing through this lengthy platform/puzzle game), the more in tune I got with TR1.  Suddenly, jumps that used to seem impossible began to seem almost trivial.  Combat was fun, and if only the enemies weren’t such bullet sponges, then I might be ready to try a run… and that was at about hour #50 of this trial.

For fun, I tried a run.  And… why are these enemies suddenly so easy to kill?

Oh.  Oh dear.  This entire time, I was playing and learning on New Game+.  FailFish.  (For context, in TR1, once you beat the game your memory card unlocks NG+, which gives you all guns and infinite ammo… at the cost of reduced health, increased fall damage, increased enemy aggro, and the enemies have like 2-3x the HP).

Once I began doing attempts, this trial began to rapidly reach its conclusion.  And although I considered Tomb Raider Chronicles and The Angel of Darkness for this trial, I enjoyed the trial of the OG game much more so.  This was a fun, albeit lengthy, challenge, that I was extremely intimidated by at first, and at the conclusion of, am entirely proud of. This isn’t a speedrun for the faint of heart, but this was legitimately enjoyable. 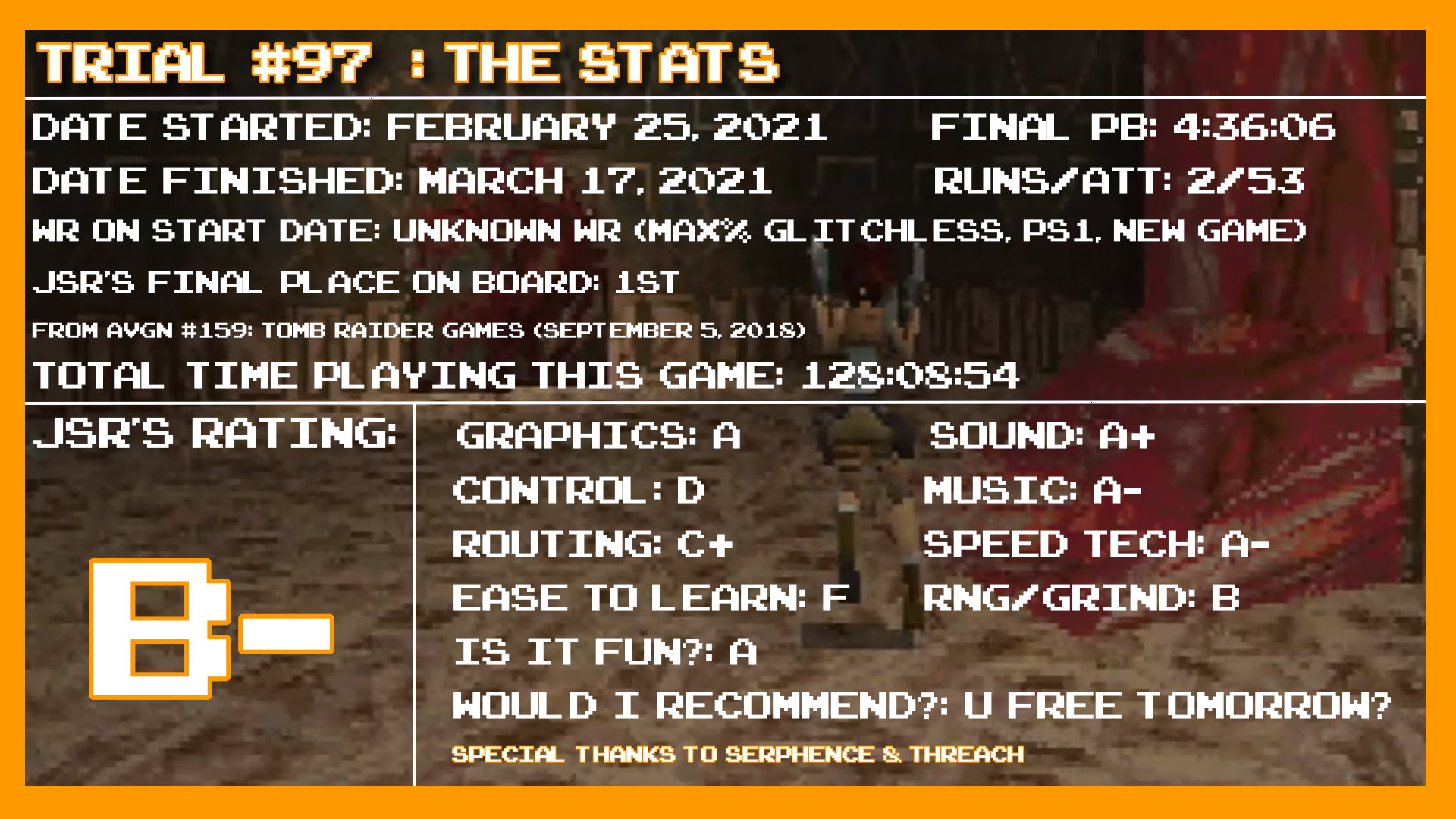