I grew up a Nintendo kid.  I held out on getting a PlayStation so I could experience the “next big thing” that was the Nintendo 64, and thus I missed out on the first initial wave of PS1 classics, such as Crash Bandicoot, Tomb Raider, Final Fantasy VII, and Resident Evil, among others.  However, when the game releases began to dry up (not that the N64 didn’t have some bangers in 1998), I decided I wanted to get a PS1.  My very first game I ever bought for my PS1 with my own money was Resident Evil 2, and holy smokes what a game choice it was.  To this day, it’s one of my favorite games I’ve ever played, and the atmosphere, graphics, and gameplay were addictive.  Confusing puzzles, claustrophobic hallways, and terrifying monsters surrounded Leon and Claire, and running past them was sometimes the only option… that is, if you even could get past ’em…

This game, is NOT RE2… in fact, this game is barely a Resident Evil game at all.  It has almost NOTHING in common with the other games in the series, sans a quick reference to “Leon S. Kennedy” in a throwaway cutscene.  Hilariously, “throwaway” might describe everything about this cashgrab of a game.  Capcom did NOTHING right here.  The graphics are some of the worst on the PS1, the models and animations seemingly not finished, rushed, blocky, pixelated and just outright awful. The music is a MIDI mess, with none of the atmospheric and haunting tunes of classic RE fame.  But wait… I’m not done ripping this game apart just yet.

This is a 1st-person “gun game” for the PS1… that doesn’t use a gun.  Yes, you heard that right.  That’s like making a Power Pad game that uses controllers.  Seriously, what was Capcom thinking?  This concept might’ve worked with a gun (except I own the Japanese version and a GunCon, which DOES work… and it’s still ass!), but the gameplay itself is hilariously broken and awful.  Out of hundreds of enemies in the game… in the speedrun I kill 4: the first zombie in the game (required), the first time you see Mr. X (required), a single hunter (required), and the final boss (also required).  Ok, there might be a rogue zombie here and there, but you can literally run past like 95% of this game’s enemies.  A great example of this, there’s a long stretch of forest designed to be a hellish corridor of laser-guided snipers and super agents.  Except… they can’t shoot you if you run.  So just run past them, they can’t hurt you.

Yeah.  You can skip them all.

The controls are at least decent, and you get used to the movement and gunplay in this game rather quickly.  If the gameplay was better it might’ve fixed this game… but the absolutely cringy voice acting and cookie-cutter story don’t help!  This is worse than The Room.  This is the worst voice acting I’ve ever heard in a video game.  Like, what were they smoking?

This is a decent speedrun held back by one of the worst games I’ve ever played.  It’s still fun trying to dodge everything and get through as fast as you can, but if you’re looking for a good run here, you’re unfortunately an unarmed man in a sea of harmless zombies.  Better run through and look elsewhere… 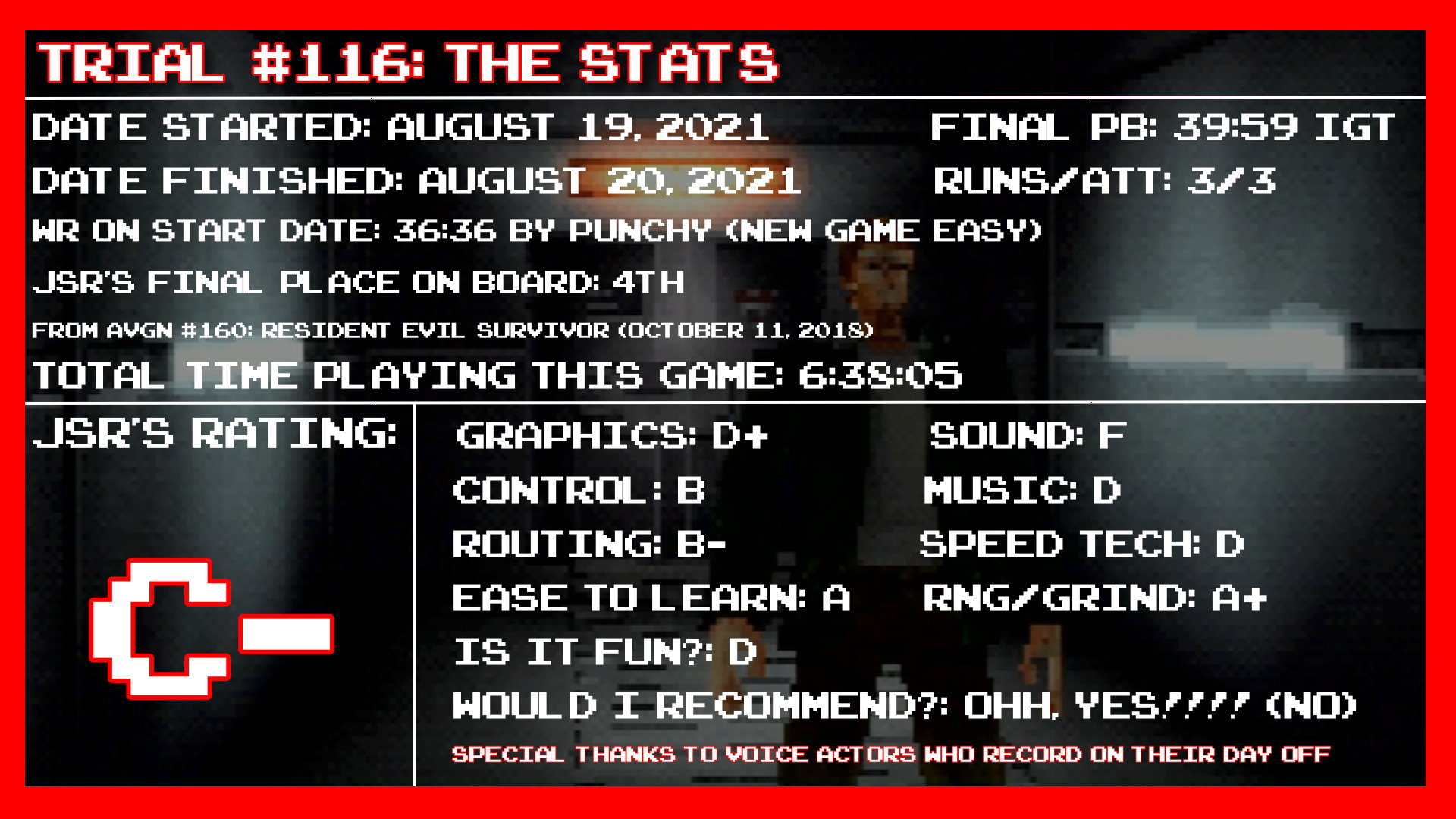