I fully expected a trainwreck.  How could I help it?  Have you seen this game?  It’s awful!  Or, at least on the surface it is.  As a speedrun it is.  I feel as if this game was so close to greatness, and I can’t be the only one; the hype for this game back in the 90’s was at a fever-pitch before the unfinished, glitchy, outright embarrassing effort from EA hit store shelves.  But as the Trial went on, I found myself almost enjoying this game, and I can see some fun here, even if it’s hidden so deep in there that it’s just not worth it to dig.

In Jurassic Park: Trespasser, you play a pair of breasts on a wheel.  I’m serious.  That’s the game.  You are tits-on-wheels, and you roll around with your flailing noodle arm and… yeah.  Just WATCH this game.  It’s terrible!  HOW DID THEY THINK THIS WAS GOOD?  HOW?  I mean, I hate to quote the Nerd himself (who reviewed this one in 2019, and is one of the newer episodes to be represented in the Trials), but WHAT WERE THEY THINKING?  SHE HAS NO FACE!  No legs, not even a left hand!  That said, the environment isn’t terrible.  Flora and fauna abound, with nice buildings, trees, vehicles, and the dinosaurs look pretty good for 1998 standards.  That said, the repetitive textures, floating assets (trees, buildings, grass, and even the ground itself seem to fly over the floor, and sometimes you can clip through gates and obstacles as well) make this a game you won’t feel impressed by when you see it.
The music is rare but outstanding when it plays, but it’s accompanied by both epic voice acting, and epically-bad sound effects and noises.

The controls are where this title truly finds itself in the bottom of the Triceratops dung pile.  The noodle arm mechanic is so broken.  I have no idea what they possibly were smoking when they made this game.  HER ARM IS LIKE 10 FEET LONG MAN!  AND IT STILL CAN’T GRAB ITEMS ON THE FLOOR!  Ok I had better stop.  Because your character’s “legs” are actually an invisible wheel, platforming is a chore to land and stick, and there’s FAR too much of it.  But oh god… try shooting straight, I dare you.  This game is the worst-controlling FPS I’ve ever played.  And the gap is a mile wide.

The speedrun is all that, but we don’t do anything!  You run!  And run!  Clip or skip or jump, then run some more!  WE KILL ONE DINOSAUR IN THE ENTIRE GAME!  So why and how is this not an F?  Because the skips and tricks are quite fun, and satisfying to pull off.  There’s lots of routing options here.  And it CAN be fun to dodge the dinos and jump the jumps, even though it’s extremely frustrating.  This can’t save this game from infamy, but perhaps saves it from an “F” rating.

Don’t speedrun this.  Any other FPS is likely a better choice.  Just don’t.  Play it for fun if you want the laughs, but do not learn the run.  Don’t say I didn’t warn you… 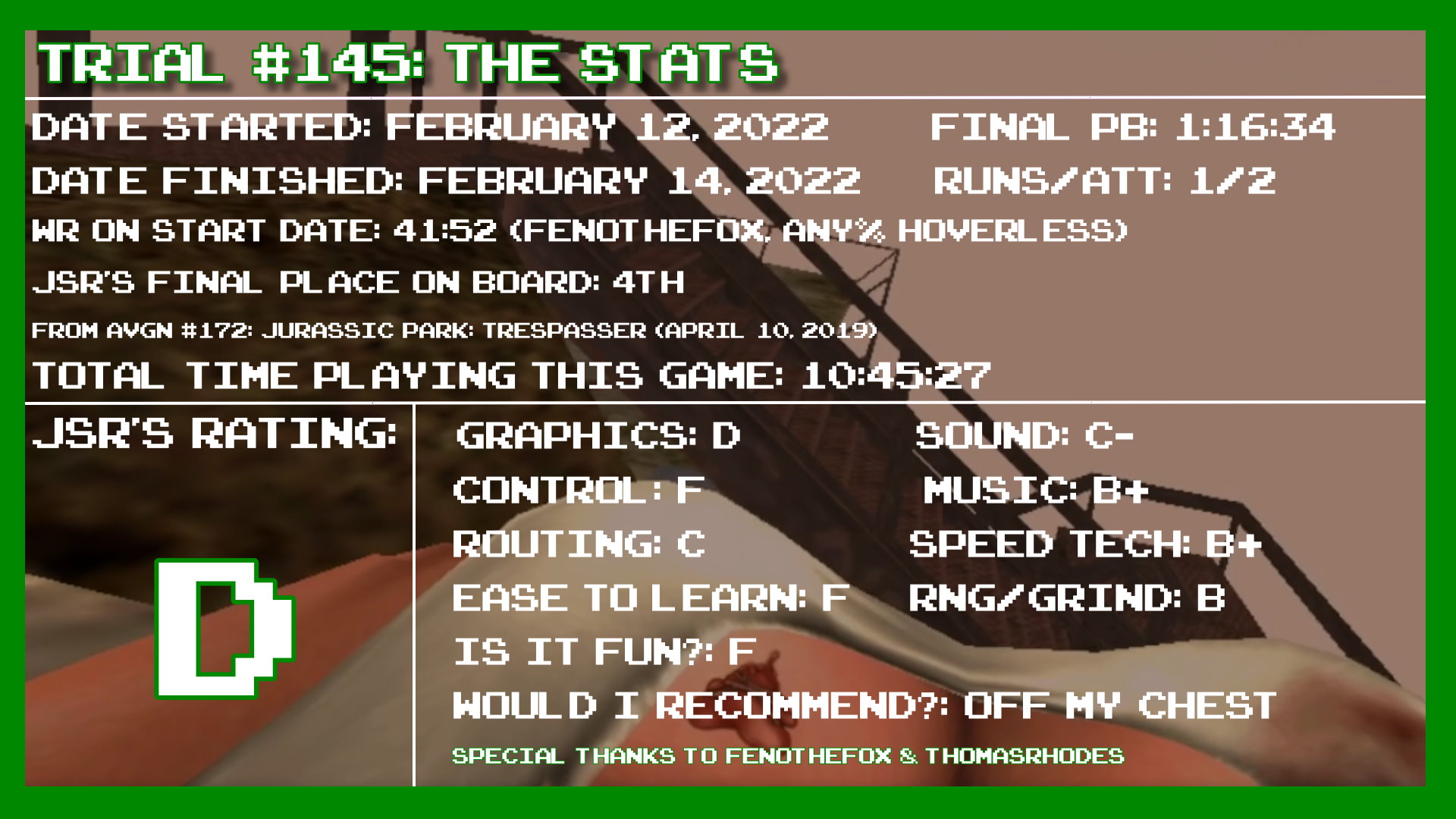