If it isn’t evident to you at all, for whatever reason, I am a huge The Legend of Zelda fan.  I’ve played every game in the franchise, 100%’d most of them, and I have so many strong feelings about every title in Shigeru Miyamoto’s legendary fantasy series.  After Ocarina of Time, I was stoked to play Majora’s Mask… but then it was delayed.  And by the time it came out in 2000, I was already moving on to the Dreamcast and PS2, and had little interest in this game.  My neighbor got the game, and we toyed around with it together (I helped him beat the Anju & Kafei quest), but honestly, I did not like it at the time.  The time and day mechanic felt limiting, and I didn’t like the tone at first.

Years later, I beat Twilight Princess for the Wii and my buddy said that he thought Majora’s Mask was better.  I told him I hadn’t played it (really, I had, but not very much.  I certainly hadn’t beaten it.)  I went out and bought a used N64 and a copy of the game off of Craigslist for a fraction of what they go for today, and I strapped myself in.  I dove into the game head-first, and oh man, was I an idiot for not giving this game a fair chance.

What can be said about this game that most of you don’t already know?  Link winds up in a strange land called Termina, the Skull Kid kidnaps his horse and takes the Ocarina of Time, and turns Link into a Deku Scrub.  As Link struggles to remove the curse and retrieve Epona, a sinister moon crashes towards the land, with only 3 days remaining until the apocalypse hits Termina.

This game is very odd, from both an artistic perspective, as well as a structural one.  It’s very different from its’ predecessor, Ocarina of Time, and some might say that was a bad idea; I think it was brilliant.  The dungeons are amazing, the characters memorable.  The world moves in “real-time” so characters will have their own lives and schedules.  Link has to beat the game in one “clean run” so-to-speak, meaning if he cannot beat all the dungeons and confront Majora’s Mask within 3 days, he must play the Song of Time to go back in time, or else he and the world will perish.

This is an epic speedrun.  I was overwhelmed coming in; my first run took over 11 hours to complete.  This is a difficult game to go fast in, as you must skip a lot of the safety items and hearts you normally collect.  Not to mention, since you’re speedrunning, you’re attempting to do as much as you can as fast as you can in a 3D environment designed to be explored.  It’s a doozie; this is not an easy run to learn, and not for the faint of heart.  But for those brave souls daring enough to take the challenge on, they’ll have more fun than they will with almost any other speedrun out there.

If you’d like more of my thoughts on this game, outside of the speedrunning perspective, check out my Majora’s Mask retrospective video from 2016 (before I knew the speedrun): 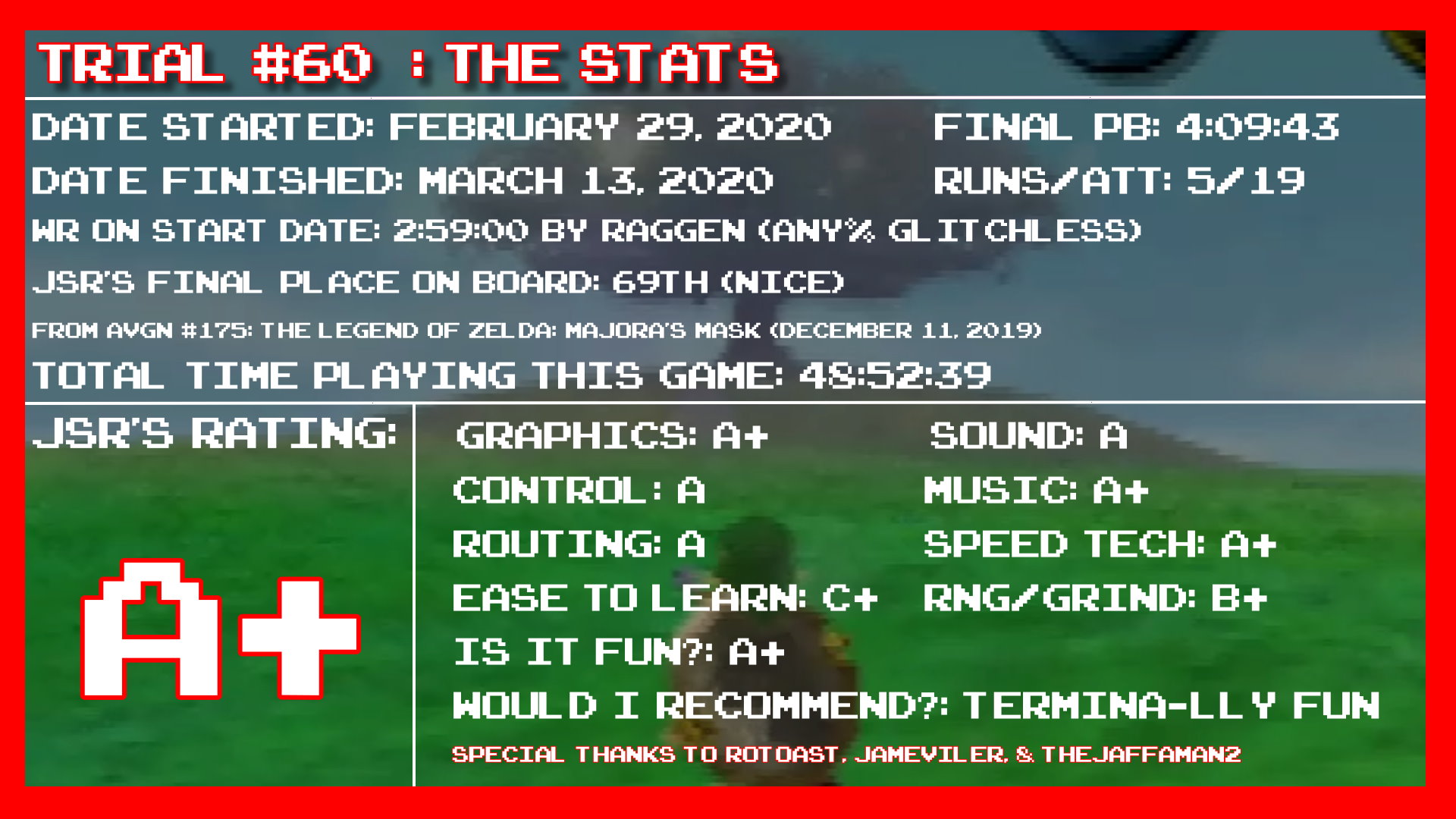