THIS IS THE EASY MODE?

This is possibly the most difficult game I’ve ever played, outside of perhaps Independence Day on PS1 or Wally Bear on NES.  THIS WAS ON EASY, I REPEAT!  And, even with unlimited credits, I was still hardly able to finish this atrocity. Though this game is an absolute BLAST with two players (and I mean that!), as a single-player trial this was like banging your head on a brick wall hoping the lump that’s forming will begin to shrink.  I would rather play Shaq-Fu.  I mean that.

Time Killers does have some nice and colorful graphics, although hardly impressive by arcade standards of 1992: compared to the vibrant, well-animated Street Fighter 2 characters and the gorgeous rotoscoped sprites and lush backgrounds of Mortal Kombat, this game can’t quite measure up.  But it gets better: barely adequate music and sound effects, laggy and slow gameplay, slippery and laggy controls, and repetitive gameplay haunt this title, which was basically farted out hoping to play off the success of Mortal Kombat.  Thus, why the last boss LITERALLY REQUIRES YOU TO DECAPITATE THEM, AND IF YOU LOSE YOUR LIMBS YOU CANNOT ACCOMPLISH THIS!

But the absolute worst part of this horrid, rancid game?  The A.I.  The awful, unfair, horrible artificial intelligence.  Or rather, “artificial intelligence”.  They read your inputs.  They suddenly “Hulk Up” and go bananas.  They have tiny hitboxes while yours get big.  Your attacks go right through them.  They can counter your attacks even when yours are about to hit and theirs shouldn’t.  And the worst one of all: the dizzy insta-kill.  If you get knocked dizzy, you’re dead.  RIP.  The AI will NOT let you survive.  Doesn’t matter if they have only hit you once (which is BULLSHIT and happens ALL the time).  You can play almost perfectly and still get screwed.  Combined with the awful controls that handle like trying to grab a bar of soap in a vat of motor oil, this speedrun is about as fun as practicing your taxes on paper.

This game is fucking terrible.  If it were longer or had limited continues, this might be the worst game in the trials.  Do not play this.  Play with dog turds instead. 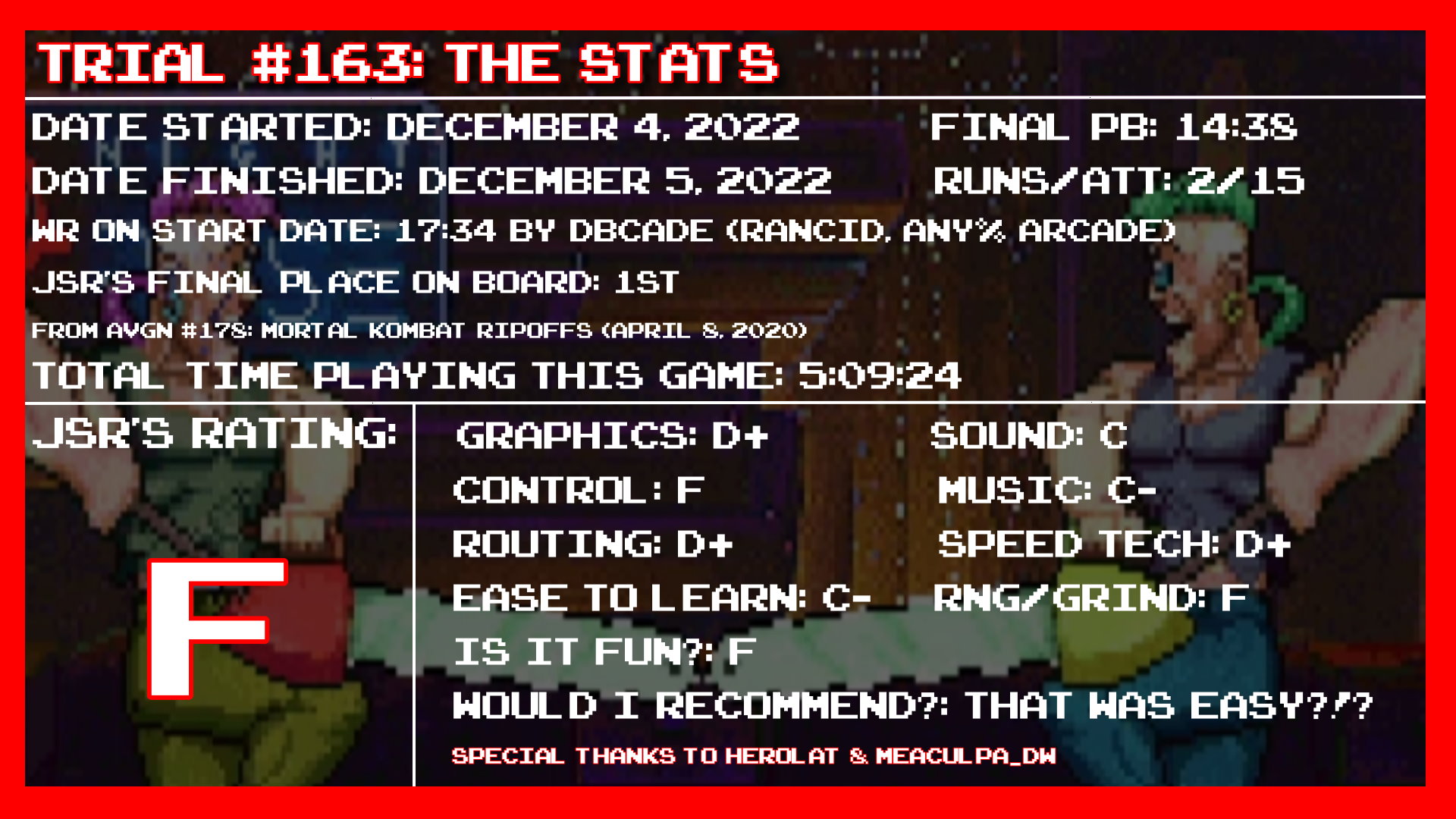