I’ve played a bit of more modern-esque titles in the AVGN Trials.  By modern-esque, I’m talking games that should contain the creature-comforts you’d expect from modern titles: autosaves, bonus features, a map/guidance system, subtitles, and you know, not crashing every 30 minutes.  Final Fight: Streetwise, a almost-great 3D brawler made by Capcom, comes so close to getting this right, but misses on a few things, and is held back by a few flaws… but still manages to be a relatively fun little brawler, if not crude and repetitive.

This game is a dramatic departure from the relatively tame beginnings of the franchise.  You play as Kyle, Cody’s brother, and you must find someone that has corrupted your brother.  You uncover a horrid plot to use glow, a new drug that hit the streets, to turn the people into zombies to do the church’s bidding.  Yeah, the plot in this game kind of comes out of left field a third of the way through with freaking zombies.  It’s… odd, to say the least, but you play through an open-world Metro City, playing minigames, collecting money to buy new moves and upgrades, and fighting punks.  Honestly?  This part of the game is very well done, and feels a lot like an early Grand Theft Auto game.

In fact, a lot of this game is VERY well done.  The graphics aren’t great by 2006 standards, but they’re far from terrible, despite a strange brown fog that seems to settle in some places.  The music isn’t bad either; lots of licensed tracks adorn this game from some popular artists and bands, notably Slipknot and Lil Flip, amongst others.  The controls are complicated and complex but overall aren’t bad, other than the awful timing of the counter system.  The minigames are simple and aren’t anything special per sé, but they’re a nice palette cleanser from the punch-punch-kick that 90% of this game employs.

You get “cameos” from all 3 of the original Final Fight characters, as well as Cammy from Street Fighter II (?).  But you cannot play as any of them; you only play as Kyle.  The speedrun isn’t terribly different from just “playing the game as fast as you can”, other than some nifty speed tech where you can de-select a bat as you slam it down on an enemy as they lay on the ground.  If you begin the attack and then press the white button, it de-selects the bat, and you still hit the enemy for a 1-hit kill, but you keep your bat! (Normally this attack shatters the bat).  Each boss has a strategy employed, but they are not easy to execute and are not something you can just pick up and run with.

All the flaws aside, this game has some absolutely satisfying combat.  Combos, counters, grapples, and special moves abound.  You get a special meter (the name of which escapes me) and you can power up your moves for more damage and more CRUNCH when you hit.  Honestly, it makes beating people up over, and over again very gratifying.  There are weapons to use as well, such as the aforementioned bat, knives, shotguns, pistols, pool cues, and even vacuum cleaners, just as an appetizer!  The controls are lacking here a bit, as there’s no good way to counter or dodge attacks unless you play slowly and on the defensive.

This is a tough game, but a forgiving one.  It’s honestly not bad.  If it weren’t for the broken lack of autosaves (and the fact this game likes to crash every 30-60 minutes) it would be close to really good.  Well, that and the slowdown/lag/slow frame rate, convoluted controls, strange hitboxes, and the constant vulgarity of this game… Final Fight: Streetwise is sooooo close to being great, but due to its’ flaws, it barely avoids being mediocre. 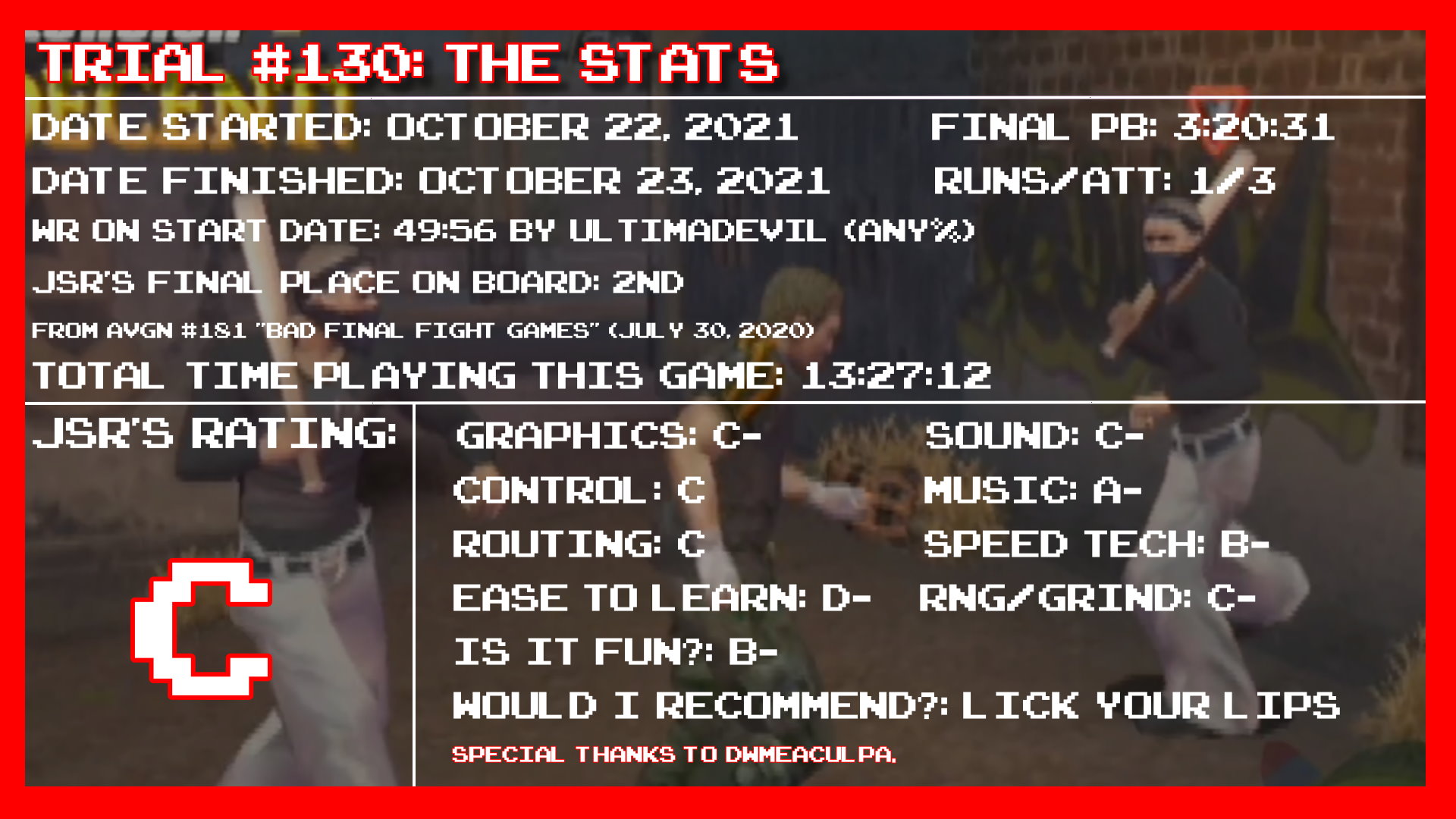