Current speedrun.com leaderboard (easy any%)
I love Capcom’s Resident Evil series.  Or, more specifically, the classic Resident Evil formulaic series, the 1-4 (and Code: Veronica) standard that was R.E. until they changed the pace in the 2000’s.  But I digress; the classic series is still my go-to favorite survival-horror games I’ve ever played; specifically, Resident Evil 2 is one of my favorite games of all time.  So it’s no surprise that I’ve played it (and the others) to death over the years.  Because of that, the flaws this series has have been masked over time and practice for me.  The stiff controls, blind camera angles, and repetitive puzzles and enemies are something I always dealt with, because Capcom KNEW how to build a horrific experience.

So does Countdown Vampires… but for much different reasons.

This Bandai clone is so poorly designed that you’d think they did it on purpose.  But this is not a bad game; far from it.  Although to be fair, that depends on your perspective.  If you’re a fan of bad films or games, such as “The Room” or “Bible Adventures”, you might pee your pants laughing at this game’s cheesy absurdness.  Bandai did such an amazing job programming how this game plays, that they forgot to design… you know… a game?  I mean, technically, the game is here and it works just fine (in fact, as of my running this game, there was only one known glitch that saved time, and it’s not a huge skip).  But the puzzles are so poorly designed that looking up the answers was the only way I could even FINISH this game casually.  Some puzzles were so easy they were pointless; others were so obscure that I likely missed some cryptic hint in a file or something.  It’s not very well done; playing Silent Hill or RE, you can see the difference.

The enemy designs are also a laugh; these are vampires?  No.  They’re zombies.  How dare you.

The plot and presentation of this game leave a LOT to be desired. Especially in the voice acting arena. I mean… the Nerd was right, this is atrocious lol. The graphics are nice, and some of the music is decent. But the voice acting is the bottom of the barrel here, and the level design is dark, muddy, and repetitive, especially at the early stages of the game, where it becomes a lot of rinse-and-repeat. But as the game progresses, the levels do get more unique and fun to play, and the game becomes much better. It’s almost like they HAD something great going, but either ran out of time and money… and the puzzles, voice acting, and plot suffered greatly for it.

This game does play very fluidly, however, and this feeds into the speedrun being MUCH better than the casual experience I had.  Going into the routing and learning section of my experience with this title, I was dreading learning this game.  My casual experience was not good.  I hated this game, other than it’s hilariously bad acting and terrible design choices, broken plot, and missing clues.  But then I got to route the game… planned every step.  Practiced the skips, the fights, and… I enjoyed this?  Maybe only a bit, but I certainly did enough to actually kind of learn the run and get the record.  I could certainly improve more, but I’ve had my fill; my next survival-horror speedrun might just have to be Resident Evil 2…

And that’s why this game scares the crap out of me.  I liked this speedrun. 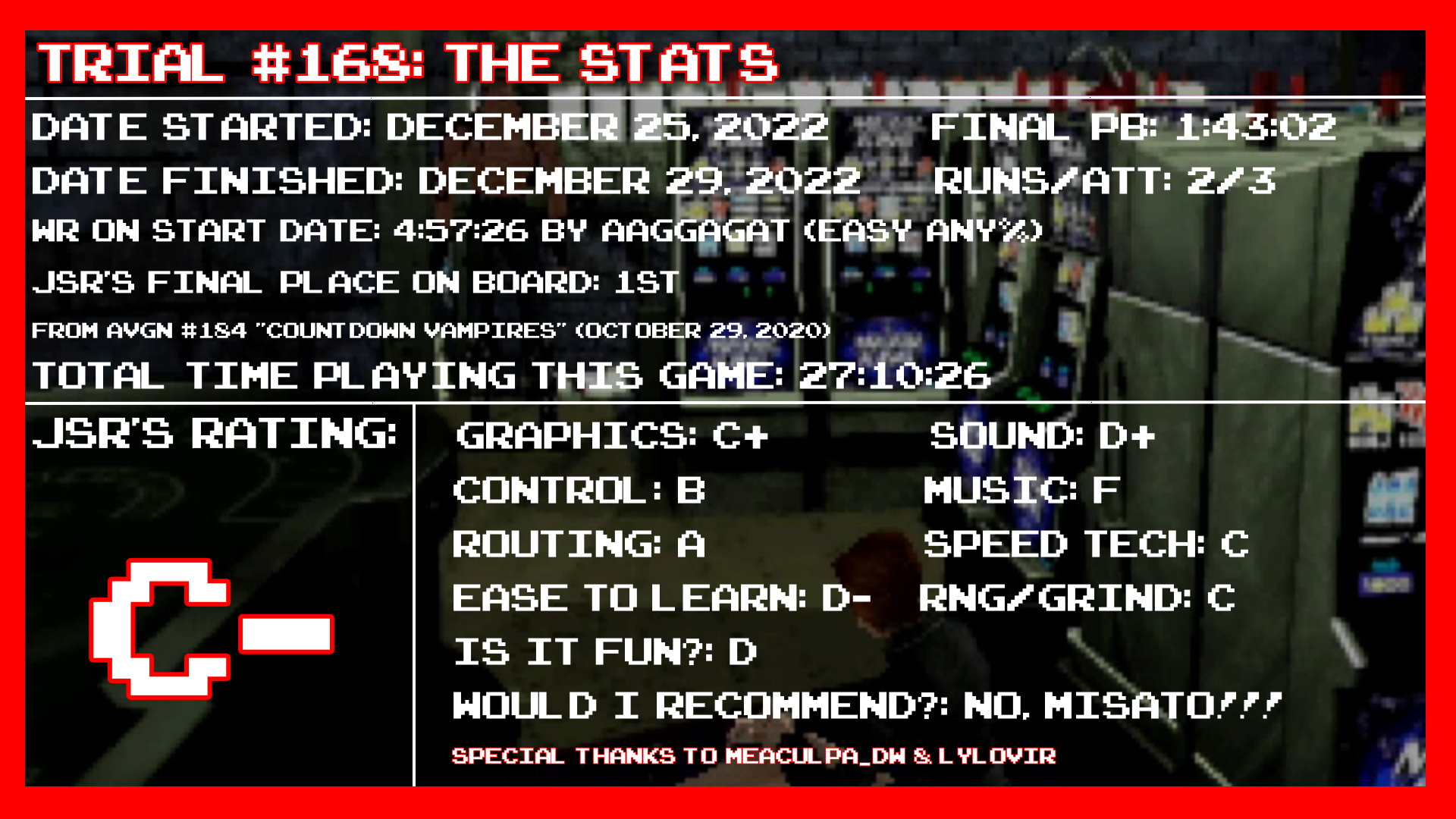