GAMES FROM THIS EPISODE OF AVGN:
–Frankenstein: The Monster Returns (NES)
-Mary Shelley’s Frankenstein (SNES)
-The Adventures of Dr. Franken (SNES)
-The Legend of Zelda (NES)

That’s the best way to describe Frankenstein on NES.  Everything about it that I can praise, I can also criticize.  For everything they obviously put effort into, they got lazy on something else.  For every awesome thing that you can do in the game, the game throws you some unfair BS that makes you want to throw the cart ALA Wally Bear across the room.  It’s far from a bad game, but it’s so far from a good one at the same time, that I can’t honestly say anything except average, and even that feels like there’s a catch somewhere I’m not considering.

You control a wanna-be Simon Belmont (that has no name) on his quest to destroy Frankenstein the monster (yes, we all know Frankenstein was the doctor, not the monster, but apparently Bandai did not, or they didn’t care…).  Frankie has destroyed a town, unleashed all sorts of monsters (including Dracula, the wolfman, Medusa, and Death himself), and kidnapped a fair maiden, and we must stop him!

The controls are tight and good, but they still feel like they’re lacking.  You never feel like you can’t control the titular protagonist, but you always feel as if there’s just a bit more you can do, and can’t quite perform the way you feel like you should.  The graphics and sound are both adequate at best, but they’re not bad at all, either.  The gameplay is fun, and at the same time, absolutely infuriating as well.

The speedrun is not any better (or worse).  You don’t get much for routing options outside of powerups and safeties (though the level skip tech is optional).  However, there is some speed tech here, the most notable of which is a glitch/skip in level 3 that skips a boss and a lot of timesave.  Nothing in this game was hard to learn, but nothing here feels necessarily rewarding or satisfying outside of the final fight against Frank, which is EXCELLENT and saves the run a bit.

Overall, Frankenstein is a decent game, and a bleh speedrun.  You can certainly do worse, but better is easy enough to find as well. 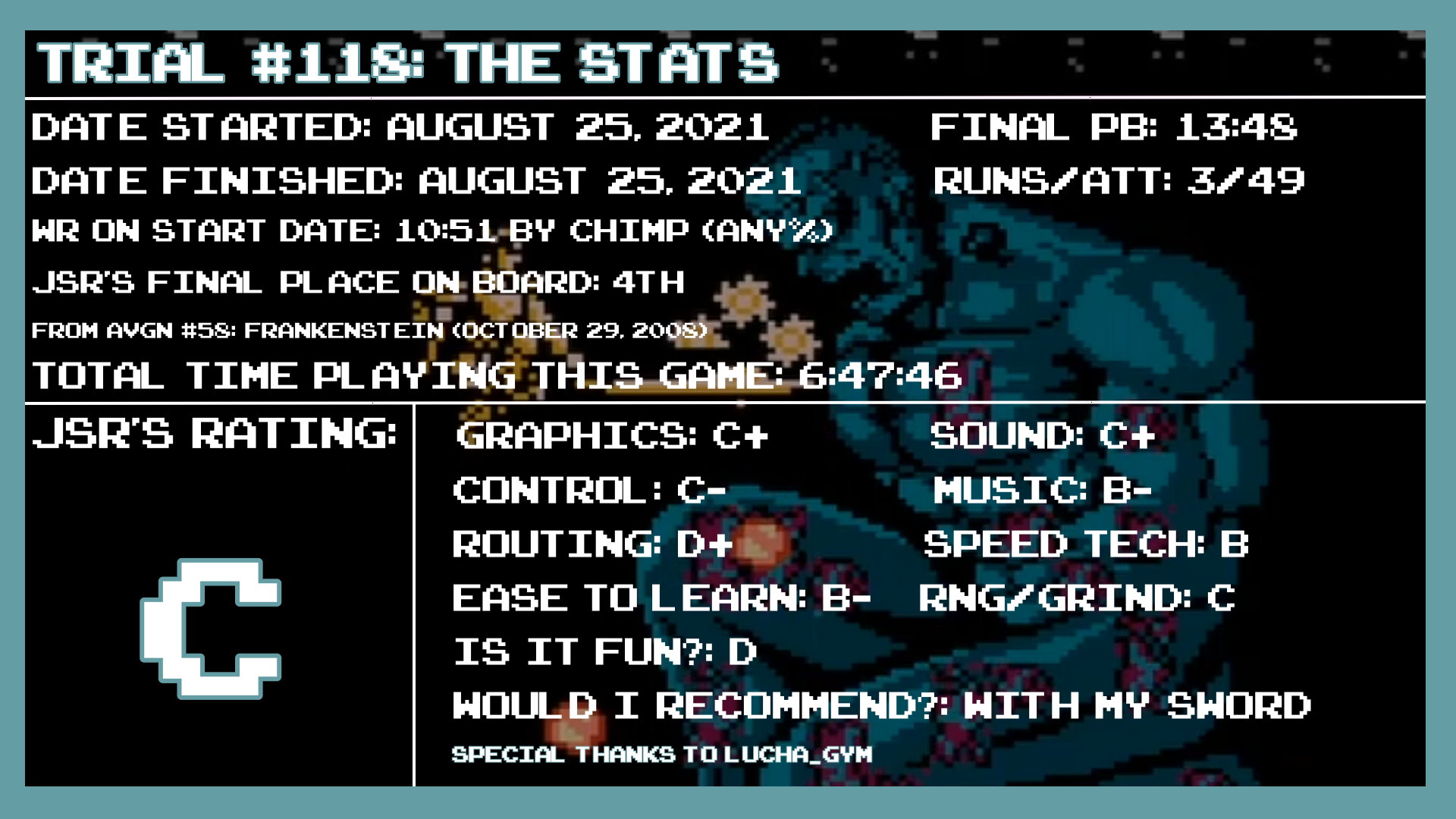