While Super Mario Bros. might be the most iconic game (and speedrun) on the NES, if not at least the most popular… The Legend of Zelda definitely deserves a spot at the top of the peak here. As one of the most influential games of all-time, Zelda 1 brings the total package to the player: amazing graphics and sound for an 8-bit adventure game, an epic quest for folks to solve, and a challenge the likes of which are only rivaled by the hardest and toughest games around, and yet, for the most part, this game is still rather fair if you’re willing to put the work in.

Of course, that’s casually… but how is the speedrun, you’re asking? Well, let me tell you.

This is the best speedrun of all-time.

How can I make such a claim, one might ask? Well, on the surface, you have responsive and engaging combat and controls, tons of subweapons, and a variety of different enemies and bosses to fight. You have amazing speed tech and tricks and glitches that are all easy enough to learn, yet hard to master; at the same time, NONE of them are required to speedrun the game, and they never really break the game or sequence break to the point where you’re skipping large chunks of the game.

The game has many hidden mechanics that make the route so much fun to make. The game has hidden counters (you can read about this and more at redcandle.us) that allow runners to strategize their approaches and plan their routes down to which enemies they plan on killing. This all being said, a new runner needs not to worry about any of this; just follow the route, grab the safeties, grab extra secrets, and coast! The skill ceiling is VERY high here, giving a runner an immense amount of upside to learning this run. This run is guaranteed to give you years of speedrunning enjoyment if you put the time into learning it.

So you might be asking: if that’s the case, why is your time barely top 10? Heh. I’ve been speedrunning this game for years. I’ve had my fill and then some. I chose 2nd quest here because Link and I have had literally tens of thousands of trips through that forsaken wooden sword cave. I was saving 2nd quest for the trials, and it came… and 2nd quest is still a lot of fun, and a lot of challenge… but I still feel like I didn’t have much more to grind out here. My work is done. I left the Zelda 1 chapter of my life on a high note and I have no regrets. 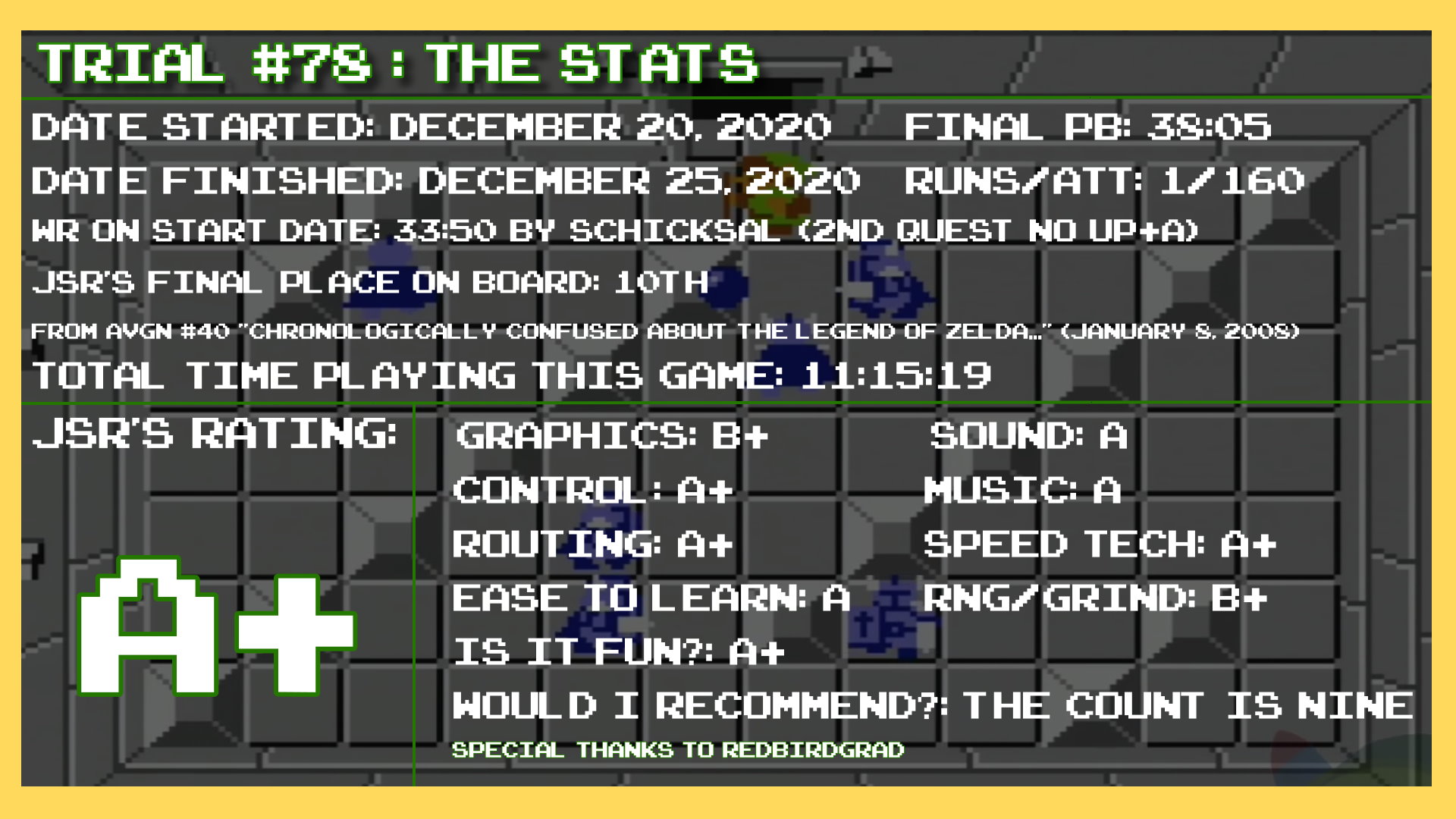