Let me be frank here: Ghostbusters for NES is an awful, awful game. Although in some ways, I feel like it can be excused a bit for being as primitive as it was (it was based on an old computer game that was ported to many consoles, as the Nerd pointed out in the Ghostbusters episodes), it still was far too difficult, ugly, and had awful controls and concepts. And yet, dare I say it: It was still a better speedrun at it’s core than this game was. But I’ll come back to that in a bit…

The Nerd didn’t really review this game, for what it’s worth: this was a ScrewAttack special that was labelled AVGN, but it was actually James Rolfe himself that reviewed it; the Nerd only cameos for a very short bit in the beginning of the video.  This was a game that barely made it into the Trials, and was probably the game most likely to be cut that squeezed in at the last second.  I can justify this because this IS classic James Rolfe/AVGN era content, before James & Mike Mondays or Board James… this was, like the Contra and SMB1 episodes, a glimpse into the Nerd’s (or rather, James Rolfe’s) mindset with video gaming.  This felt like a game I had to include, and I’m glad I did… kind of…

Let me just say this about Ghostbusters: The Video Game Remastered (which I will not call Remastered any more from here on out; the “remaster” is literally a slight texture improvement and free DLC. It’s the EXACT same game as the original release): playing this as intended is a freaking blast, especially if you’re a Ghostbusters fan.  The graphics aren’t mind-blowing, but they’re nice and represent the characters and the world brilliantly. The music and sound effects are straight from the movies, and the voice acting is some of the best, if not the best, I’ve ever seen in a movie-based game.  Not Lord of the Rings, Matrix, Star Wars, or Harry Potter come close.  With the original cast voicing their characters (including the late Harold Ramis, who co-wrote this alongside Dan Akyroyd), you are glued to the screen whenever any of them speak, and they all do a fantastic job.  The 4 Ghostbusters themselves deliver a performance that should have won them awards or something; it’s amazing!

The gameplay is a mixed bag which leans towards positive: you control an unnamed “rookie” with an experimental proton pack that has many sub-weapons.  The game has a true-to-the-movie ghost trapping mechanic that is SO MUCH FUN™!  Even until the end of the game, the act of blasting ghosts and trapping them NEVER gets old.  What DOES get old, however, are the linear, uninspired level designs and repetitive enemy sets.  You’ll fight the same style ghosts pretty much throughout the majority of this game.  Some fights stand out as brilliant (the Stay Puft Marshmallow Man fight is my favorite boss fight, albeit still far too easy and predictable), while others are almost entirely yawn-enducing.  Though the controls are fluid and well-done, near the end of the game you’ll be surrounded by enemies and with no cover; your player character ragdolls all over the floor, you helpless to stop him, as you and your team are obliterated and you must try again… which doesn’t happen often: even on higher difficulties this game is far too easy if you know what’s coming.

Which is where the speedrun comes in: this is almost entirely a bad speedrun.  Save for one technical skip in the library, there are ZERO skips, glitches, or sequence breaks in this entire game.  There is little for speed tech outside of movement tech, which is cumbersome, annoying, and monotonous.  With unskippable cutscenes sometimes (and the ones you CAN skip, you can usually only skip part of them), there is a LOT of waiting around and wasting time.  A good speed game this is not; a run that a top runner can do around 2 hours or so, is probably only about an hour of action.  And although some speedruns can get by these limitations and issues with fun tech and gameplay, the repetitive enemy sets and linear layouts makes for a very paint-by-the-numbers experience that got old for me before I even began my first run, utterly destroying any potential this had to be a good speedrunning experience.

I do not recommend this speedrun to anyone, even hardcore Ghostbusters fans; the casual game is how this title should be experienced.  Honestly; I love this game, but I hate this run.  I’m dead serious when I say this: bustin’ on the NES, as flawed as it is, is a better speedrun then bustin’ on Ghostbusters: The Video Game, and that does not make me feel good. 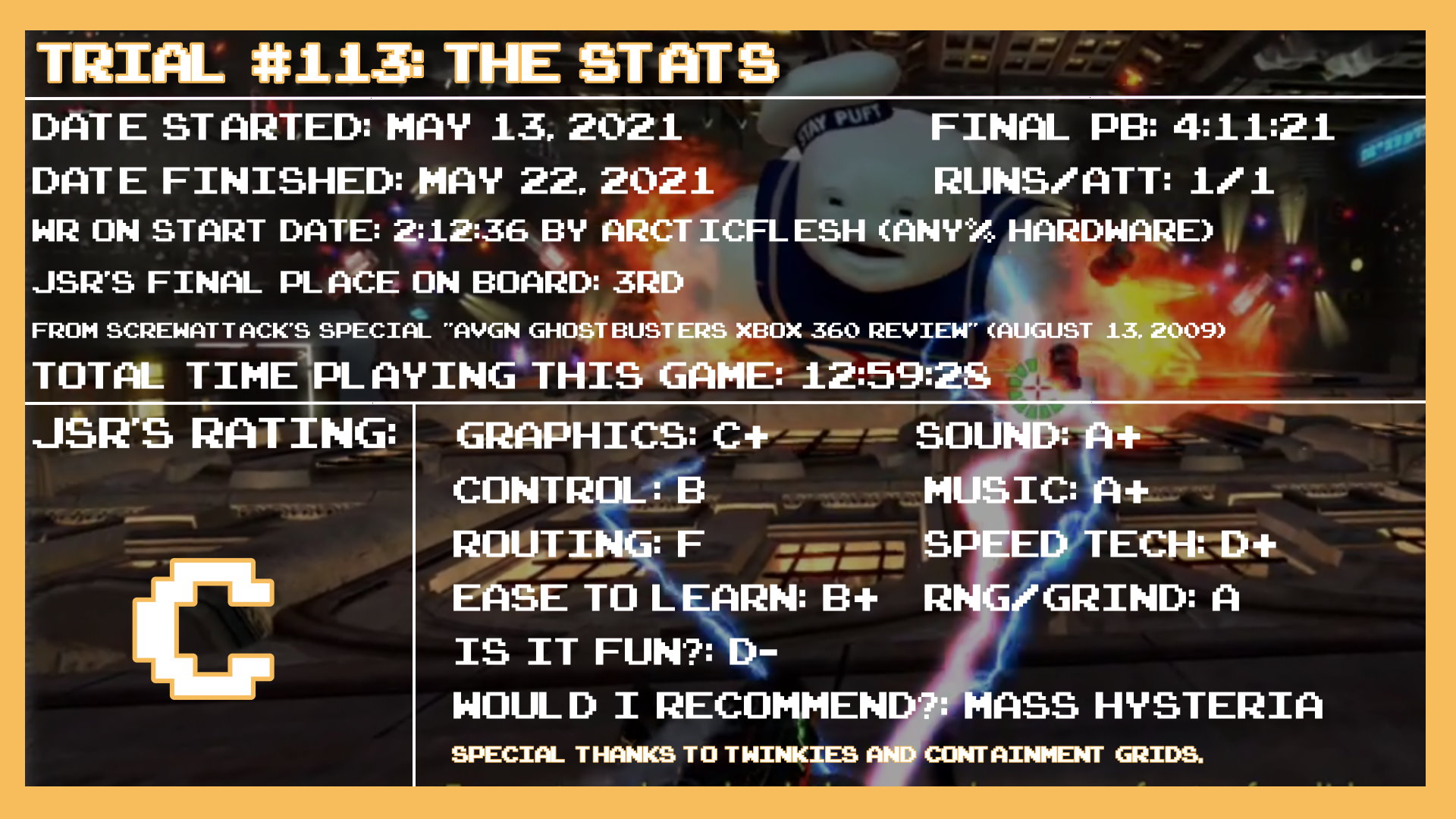