91. Zelda II: The Adventure of Link

Current US version 100% AK, 1CC Leaderboard (speedrun.com) (for reference only)

Some may call Zelda II: The Adventure of Link the “black sheep” of the Zelda franchise, but if you ask me, that’s an unfair comparison (the REAL black sheep is Triforce Heroes, and no, the CD-i games are better than that game). Zelda II was Nintendo in its prime, taking a ballsy chance at changing up a formula that was already a smash success. And, while they ended up going back to the old formula for A Link to the Past (a wise choice in retrospect), in my opinion, they nailed what they were going for in Zelda II… but not without a few caveats.

Link is in his first true sequel here, and must place 6 gems in palaces throughout Hyrule, in order to recover the Triforce of Courage and awaken Princess Zelda. There’s a LOT more to that story, but that’s the Cliff’s Notes version; this is a much more fleshed-out world than what was in Zelda 1. The action scenes are all in side-scrolling platforming sections, with the only top-down exploration happening in the overworld. Link has experience points this time around, and can also visit towns for the first time.

Again, there’s a lot to cover in this title that others do better than I, so let’s just cut to the REAL purpose of this write-up: the speedrun. FULL DISCLOSURE: I have been speedrunning this game for years, even well before the Trials were even a concept to me. When I came up with the games list, this game stuck out along a few others as something that was a “freebie”, and that concerned me. I had two options: learn any% (eww), or speedrun the Japanese version. What? Why the Japanese version?

The Japanese version was released on the Famicom Disk System in Japan, and is a much different game in some aspects, mostly in regards to the speedrun. Besides the obvious stuff like bosses and elevators and some sound effects, the entire levelling system has been re-done for the US version. Since the speedrun relies on levelling to go as fast as possible without being in too much danger, the Japanese version is, in my opinion, an actually superior version of this title to speedrun. Gone is the 50-point P-Bag grind from Magic Cave at the start; you get the bag, it’s a bonus more than a huge time loss if you don’t.

100% AK, 1CC means 100% and getting all the keys. This forces a runner to explore every nook and cranny of the dungeons. 1CC is an arcade term meaning “One Credit Clear”; in this regard, this eliminates the up+a “game over” as a time-saving death warp, but also means the runner cannot organically game over, lest their run be disqualified. It adds a lot of difficulty and learning curve to the run for new runners, but this is merely an annoyance once runners become adept at the game.

Zelda II is both a ton of fun, and extremely aggravating. The combat is so satisfying, and might make this speedrun the most fun I’ve ever learned, in terms of pure executional enjoyment. However, the annoying encounters (by far the biggest time loss one suffers in the speedrun), the long stretches of walking, and the needless key gathering hold this run back from the A+ tier. Still, this is an essential speedrun for anyone to learn if they want to say they run the best games on the NES. Don’t be intimidated! It’s so worth it! 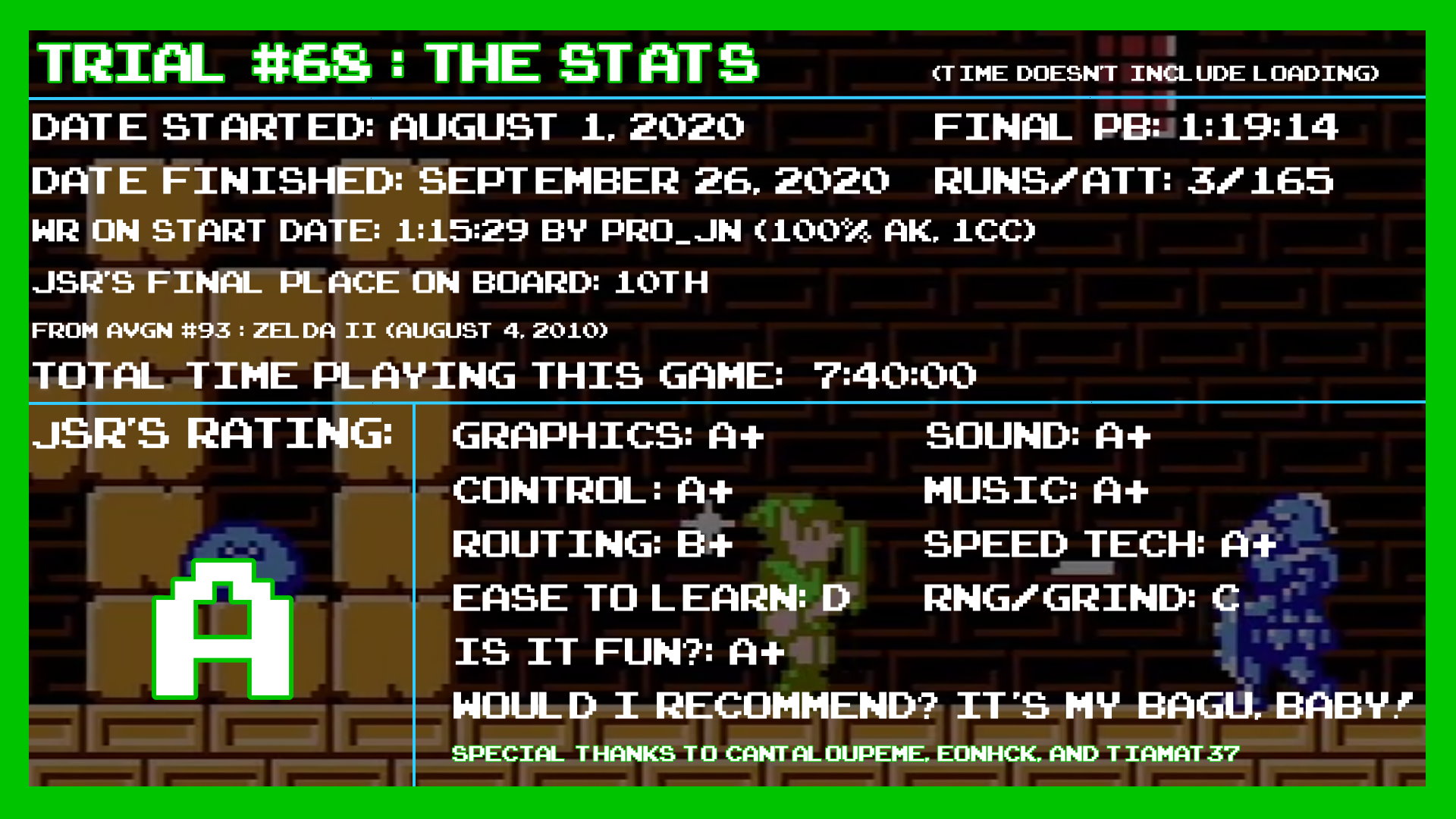