Current Any% Leaderboard (speedrun.com)
(note: the leaderboards have since changed. The category I submitted my time for, “Subless”, has since been absorbed into the Any% category, changing my final rankings. These are the current leaderboards as of February 2021. As far as I know, there are no legacy boards.)

Smile and smell the ocean air.  The rainbow is looming over the horizon, and it’s only natural to fear it.  I mean, we all know what the rainbow means… don’t we?  Jaws, by the infamous LJN, is yet “another crappy LJN game” on the NES, if you ask most folks.  And I won’t go out on a limb and say that this is a hidden gem on the NES, but in my opinion, this is far from a crappy game, and the speedrun makes it borderline excellent.

You play as a sailor/diver who must defeat Jaws.  And yes, that is literally all you have to do to beat the game.  It seems simple on the surface, but Jaws is very strong and can absorb damage like a sponge.  You must dive deeper into this game, literally.  Collecting seashells from the bottom of the ocean floor allows you to “power up” when your ship heads to port.  Once you get a couple level ups, you can actually damage the great white shark, and the battle truly begins.

The speedrun utilizes a specific route to power up just enough to do the deed, and then it’s mash city, baby!  And, since it’s such a short run with low RNG, this part is actually a blast!  It’s speedrunning at its’ finest, sans the tech: do the setup and execute.  No muss, no fuss… or so I wish I could say.  Because if that were it, this would be a top-tier speedrun.  But there’s a catch!

You still need to finish the shark off.  To do so, you must impale Jaws with the end of your boat.  And… ya know, this is stressful and dumb and difficult and bleeeeh.  It ruined the speedrun for me a bit.  What was once a run I would’ve loved to grind and take lower, became more of a chore: you must get through the fun part of the run just to have a shot at 15 seconds of terror.

Still, if you can master that ending sequence, you’re a big Jaws fan, or you love this game, this is a great speedrun to learn!  Easy, quick, and fun! 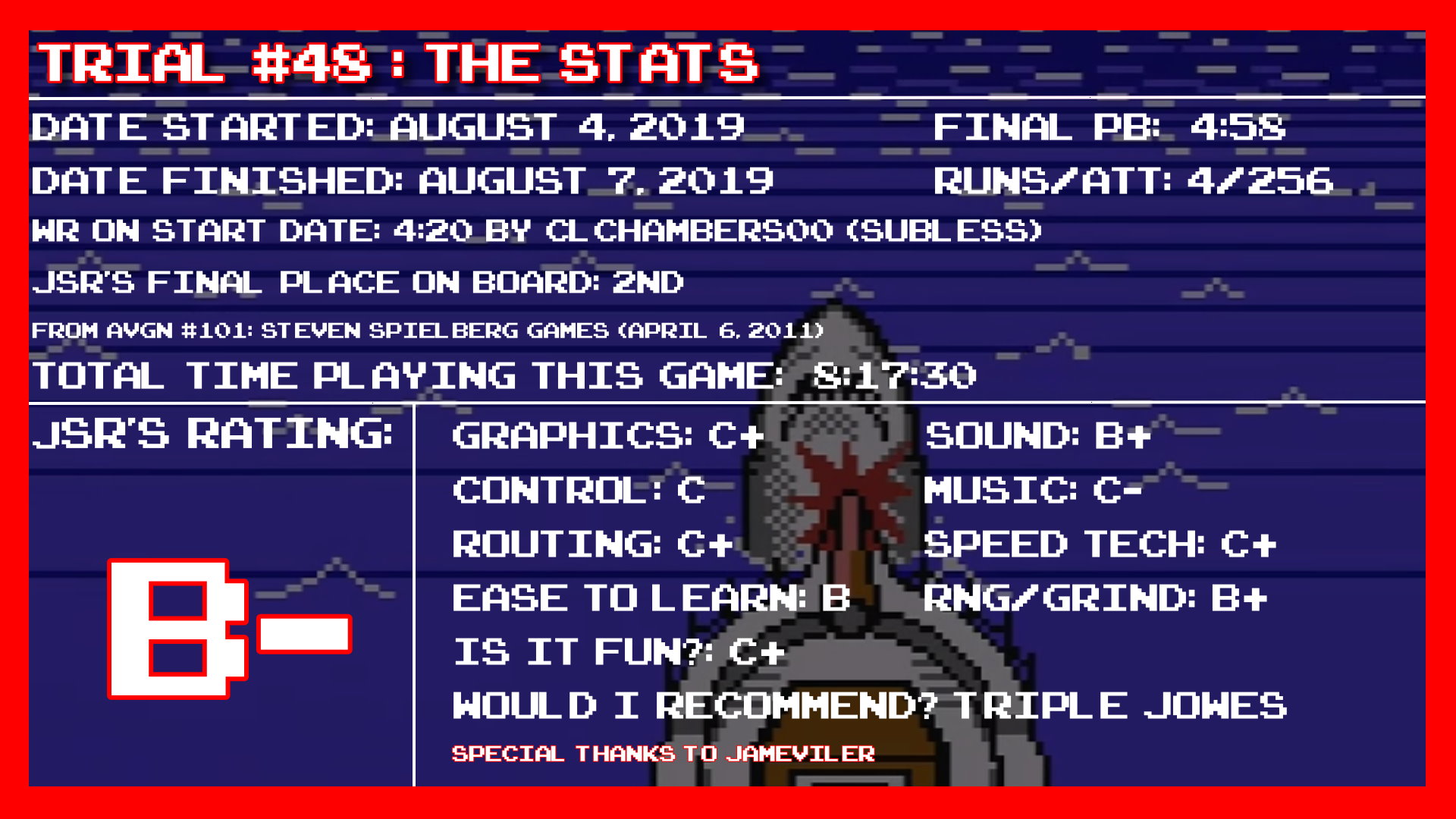