80. Castlevania: Symphony of the Night

Castlevania: Symphony of the Night (1997, PlayStation) by Konami

What is a speedrun?  A miserable little pile of secrets.  And that’s what made this game so hard for me to learn for a while; the information hiding the secrets of Symphony of the Night (SotN) was hard for me to come by.  That might not have mattered had this game been more familiar to me, but I made the mistake of skipping this game in its heyday, and not playing it at ALL until right before this Trial began.  Boy, I was a fool…

in SotN you play as Alucard (yep, same one from Castlevania III) looking to confront your father.  There’s mysteries and secrets abound in SotN, and I won’t spoil anything here.  If you haven’t played this game play it before you watch my run, please!  This is one of the best games of all time, and I was an idiot to have let it pass me by all these years.  You have a variety of attacks, weapons, spells, transformations, helpers, items, and techniques.  You can level up as you play, unlocking more perks.  The amount of weapons and equipment is almost as staggering as the size of this game (it’s big JodiesSmile) and the replay is insane.

That being said, this is a tough, tough game, and coming into the learning of this speedrun I had exactly one single playthrough, casually, and I’d never seen a SotN run before.  At first, the techniques were all I could find information on, and the info wasn’t very well done (there’s much better info today).  Thanks to some help from Turbodog702 and Neostrikes, however, as well as the persistence I needed, I was able to learn the difficult (but cool) tricks in this run: Alucard Skip, Death Skip, Clock Jump, and the clip into Dracula’s Lair.

However, the difficulty of this run, combined with the immense amount of mashing you do playing this, means that after weeks of grinding I had enough.  In my PB I died to Dracula twice.  I had seen enough, and moved on.  I absolutely will be returning to this game after the Trials, because I enjoyed this, and it was a very satisfying speedrun once you get good at it.  If you are a determined runner, a fan of this game, or want a long-lasting speedrunning challenge, give SotN a try! 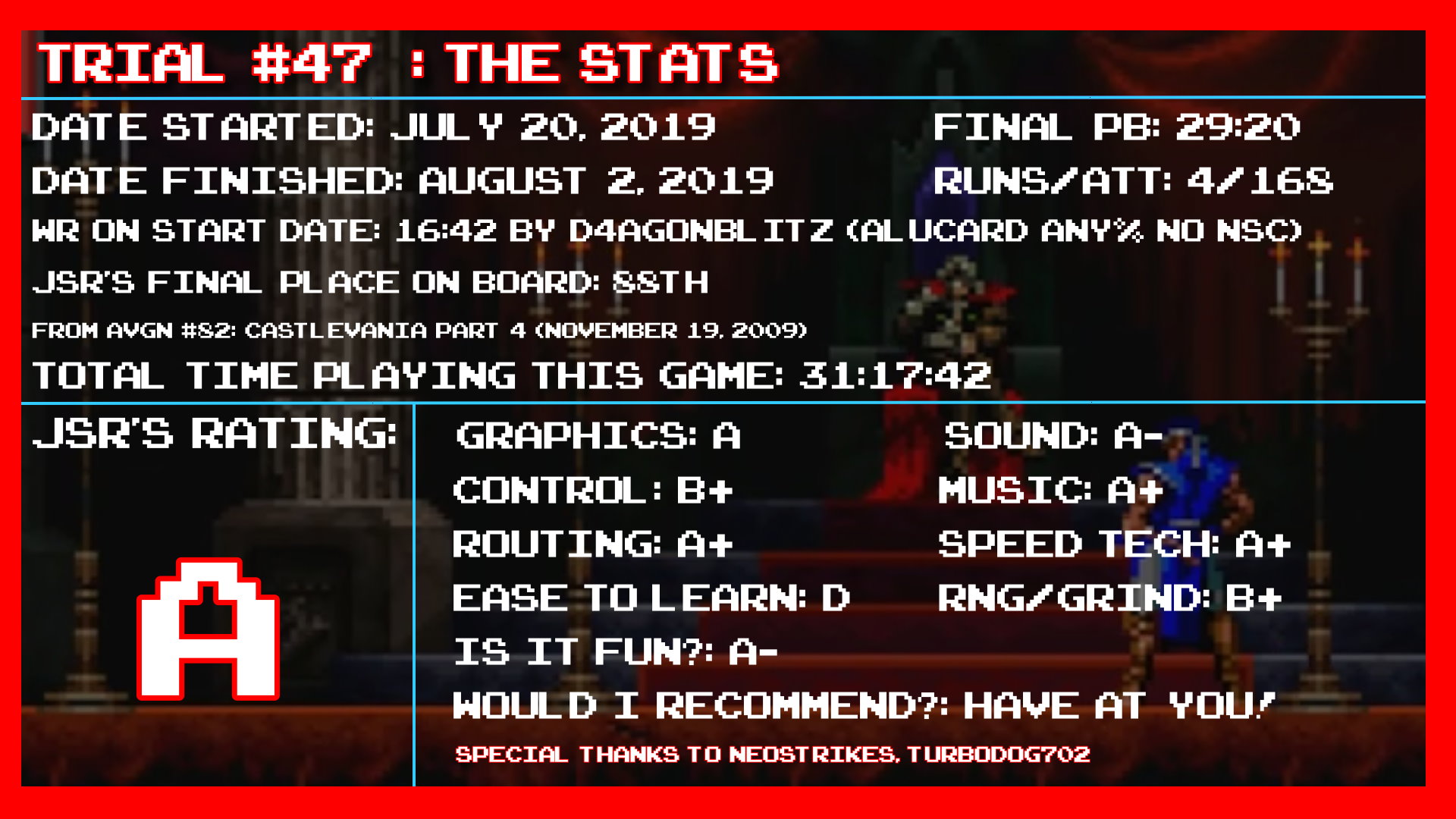