And on the 7th day, someone made a lot of money selling crappy games to religious folks across the United States…

The Wisdom Tree story is well-known and told dozens of times over by folks focusing on that story; I won’t go too much into it today.  All you need to know is this: Color Dreams was a company that reverse-engineered the NES-10 Lockout Chip, and then proceeded to make terrible, unlicensed games that nobody bought.  So they changed their name to Wisdom Tree, changed their game content to religious content, and the rest is history.  Bible Adventures is one of many games they made for the Nintendo Entertainment System, and like the rest of their selection, this was not Nintendo-licensed.  It’s a glorified multicart with three games: Baby Moses, where you are Moses’ mother, and you must carry him to safety; David & Goliath, where you must herd sheep and then defeat Goliath in battle, and finally, the focus of today’s article (and this AVGN Trial): Noah’s Ark, where you control Noah and must gather 2 of each animal (or a specified amount) before the big show floods the world out.

At first glance, this game doesn’t seem so bad, and almost seems (dare I say)… fun?  And casually it sure is; this is a very unique take on the Noah’s Ark story, and makes for a very intriguing gameplay experience… on the surface (we’ll get to why in a bit).  With a lot of variety in both the animal types, as well as the challenges they present (birds fly away from Noah, except for some eagles that pick Noah up and carry him away; bulls will ram you, lions will maul you, and ducks… well the ducks are just cute af), this game is easily the best of the three, and presents the most “bang for your buck”.  However, this premise is completely ruined by some of, if not THE, worst controls on the NES I’ve ever experienced.  These are “Wally Bear” and “Kid Kool” type levels of bad: good luck controlling Noah when other enemies begin to swamp around you and you’re just trying to drop off your current haul.  With terrible ice physics, phantom and eaten inputs, and awkward momentum physics as well, once you have to correct or adjust an input it’s already too late.

Luckily, this game has some nice graphics to show off Noah’s world.  The animals and Noah all look outstanding, and the environment is detailed and colorful (and, considering what Color Dreams put out with games such as Secret Scout, this is quite refreshing to see).  However, the music is absolutely abysmal; it’s not so much annoying as it is bland.  It’s just bass notes.  Looping over and over.  That’s it.  No treble.  No percussion.  Not even a real melody to speak of, outside of the redundant bass line that drills into your brain like a mad scientist.  The sound effects, while comical (the sheep and cows make awesomely cheesy noises), are pretty lo-fi as well, and are barely representative of what you expect from the game.

Now, let’s talk the speedrun.  I didn’t hate it, if I’m honest, but I certainly didn’t enjoy it, either.  The controls are the biggest flaw.  Trying to make accurate jumps and time everything perfectly with the awful controls and the brutal RNG is like trying to high dive 100 feet into a cheerio.  It’s a mess before you even begin.  That said, the routing options are fantastic, with multiple ways to plan out each level, and it is not a difficult speedrun to learn.  Anyone with a day or two could put up high-end caliber runs on the board.

Noah’s Ark is the best of a bad lot.  That’s like saying drowning is the best way to die.  I’d steer far clear of this turd unless you have nostalgia for it, you’re a God nut (there are some intriguing bible quotes in this game, although I’m not sure if that justifies playing it at ALL), or you’re a kusogé fan like I am…

What’s that?  You’re saying I’m a nutcase for playing this?  I can’t spot the lie… 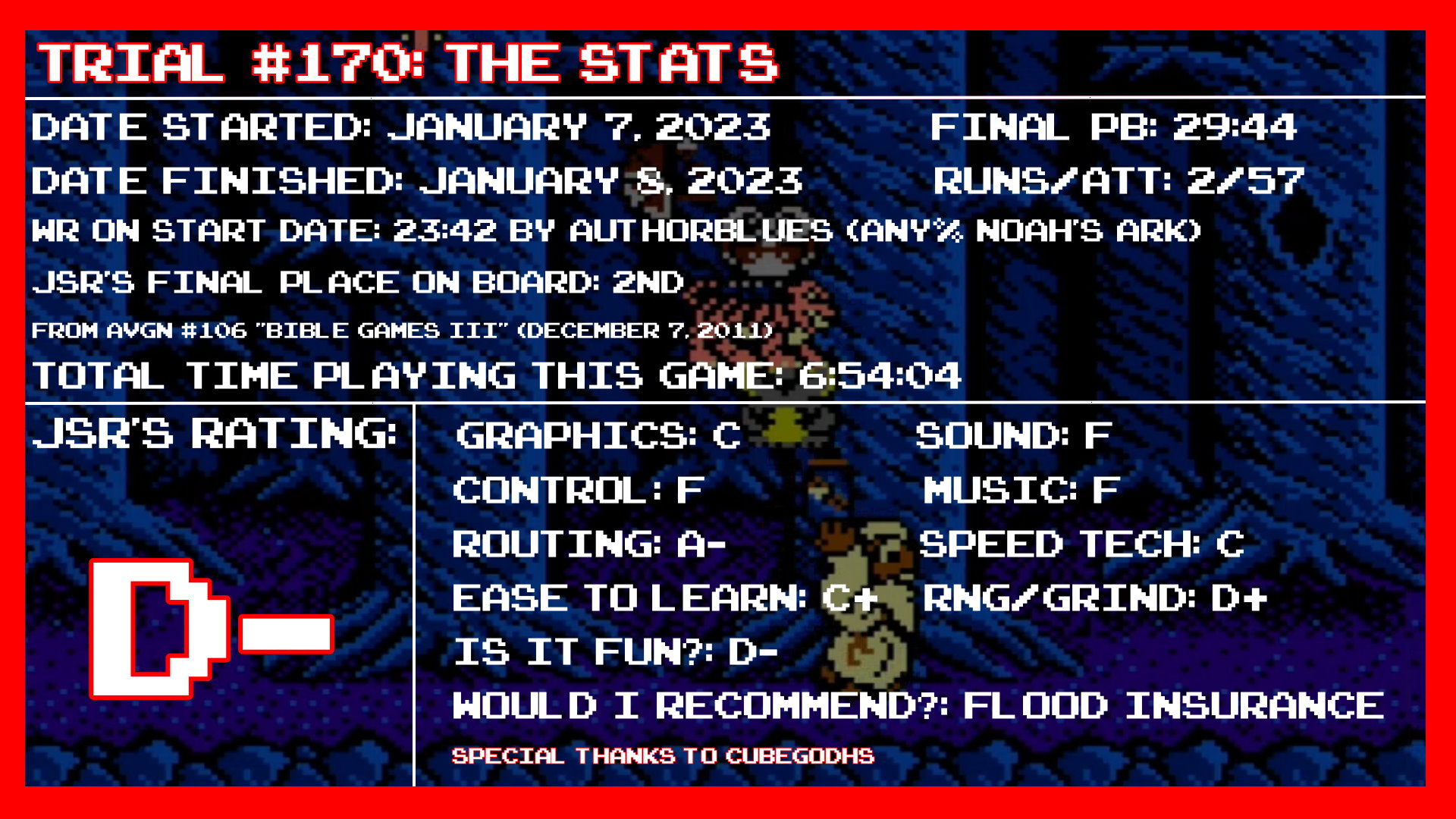