58. Zelda: The Wand of Gamelon

GAMES FROM THIS EPISODE OF AVGN:
–Zelda: The Wand of Gamelon (CD-i)
-Zelda II: The Adventure of Link (NES)
-Link: The Faces of Evil (CD-i)
-The Legend of Zelda (NES)

Some games are so legendary in their awfulness, that once you see them, you can’t help but know exactly what the fuss is about.  Some games, like Independence Day and SwordQuest: Earthworld are just bad, and have no redeeming factors whatsoever.  They’re hard to watch, boring to play at best, and aggravating at worst.  But that’s just one category of “bad game”, and there’s many others: games that harness the power of other media, such as “The Room”, an “awful” movie that is surprisingly entertaining and watchable despite it’s awfulness.  And that brings me to the topic of this article and review: Zelda: The Wand of Gamelon.

You all know the story, but the abridged version goes like this: Nintendo and Sony had a deal to make a CD add-on for the Super NES.  However, Nintendo hated the deal, and embarrassed Sony at CES 1991 by announcing that they had cancelled their deal and instead made another one with Sony’s arch-rival, Philips.  Sony was (rightfully) pissed off, and went on to make the Sony PlayStation, which kicked the Nintendo 64’s rear end in the late ’90s.  Philips, meanwhile, never did make the CD add-on for the SNES.  Instead, they utilized their license to make a Mario Game, Hotel Mario, and 3 Zelda games, Zelda’s Adventure, a top-down adventure game similar in concept (but far from execution) to the original The Legend of Zelda, and 2 side-scrolling games similar to Zelda II: The Adventure of Link: Link: The Faces of Evil, and Zelda: The Wand of Gamelon.

This game is notorious for its’ cheesy voice acting and awfully-animated cutscenes.  But let me just address that elephant in the room: the cutscenes, in my opinion, are absolutely a delight!  I know they are bad, and that is exactly why I love them! They honestly provide ample entertainment value, and I can’t be alone; YouTube is FULL of videos, from YouTube Poops to anthologies and remixes, and even music videos!  Seriously, a part of me almost thinks they did this intentionally; they’re hilarious!

But the other criticisms of the game are at least more warranted, but I think are overblown.  People criticize the graphics as really high-resolution and crisp, and colorful, to a fault: you can’t tell where you’re supposed to jump!  Combined with the awfully-awkward jumping controls, and it makes for a steep learning curve.  However, once you get used to them (and it doesn’t take THAT long, honestly), they don’t burden you too long.  In fact, I’d argue that the graphics are amazing for their day, and the jumping controls, though clunky, are still not terrible.  Pressing up to jump is never a good time, but the CD-i is limited to only 2 buttons, so I feel like they didn’t have much choice.  It’s too bad they didn’t program an option in for the 3-button and 4-button controllers; I strongly believe that the biggest “fault” of this game would’ve been a non-factor in that case…

The music is another area that people seem to hate, but I honest-to-God love this soundtrack!  Sure, the OST is dumb for a Zelda game, but keep in mind that in 1993, there were only 4 Zelda games out.  There was no “legacy” for this game to live up to.  And though this OST won’t win any awards per sé, I will stand firm that this game has some bona-fide bangers in its’ soundtrack!  The sound effects are crisp and CD-Quality, and honestly, the presentation here has a bad reputation that I truly don’t believe it deserves.  The ONLY reason people hate the Zelda CD-i side scrolling games is because they are ZELDA games, and if these were standalone titles, I think they’d be received much better.

The speedrun is even better!  With routing options galore, and a shallow learning curve with almost ZERO RNG, this is a speedrun that I’m shocked hasn’t gotten more love from people.  This speedrun was absolutely a treat to play, and I only wish more folks would give it a try!  One of the most delightful surprises in the AVGN Trials so far, without a doubt!

(One side-note: if you are interested in trying this game out, there is an amazing HD remake for PC with a lot of the issues addressed.  Faster movement, higher jumps, less grinding, remappable buttons, and item pickups without the sword are all in there!  Not to mention a 16:9 layout and no load times!  Check it out!) 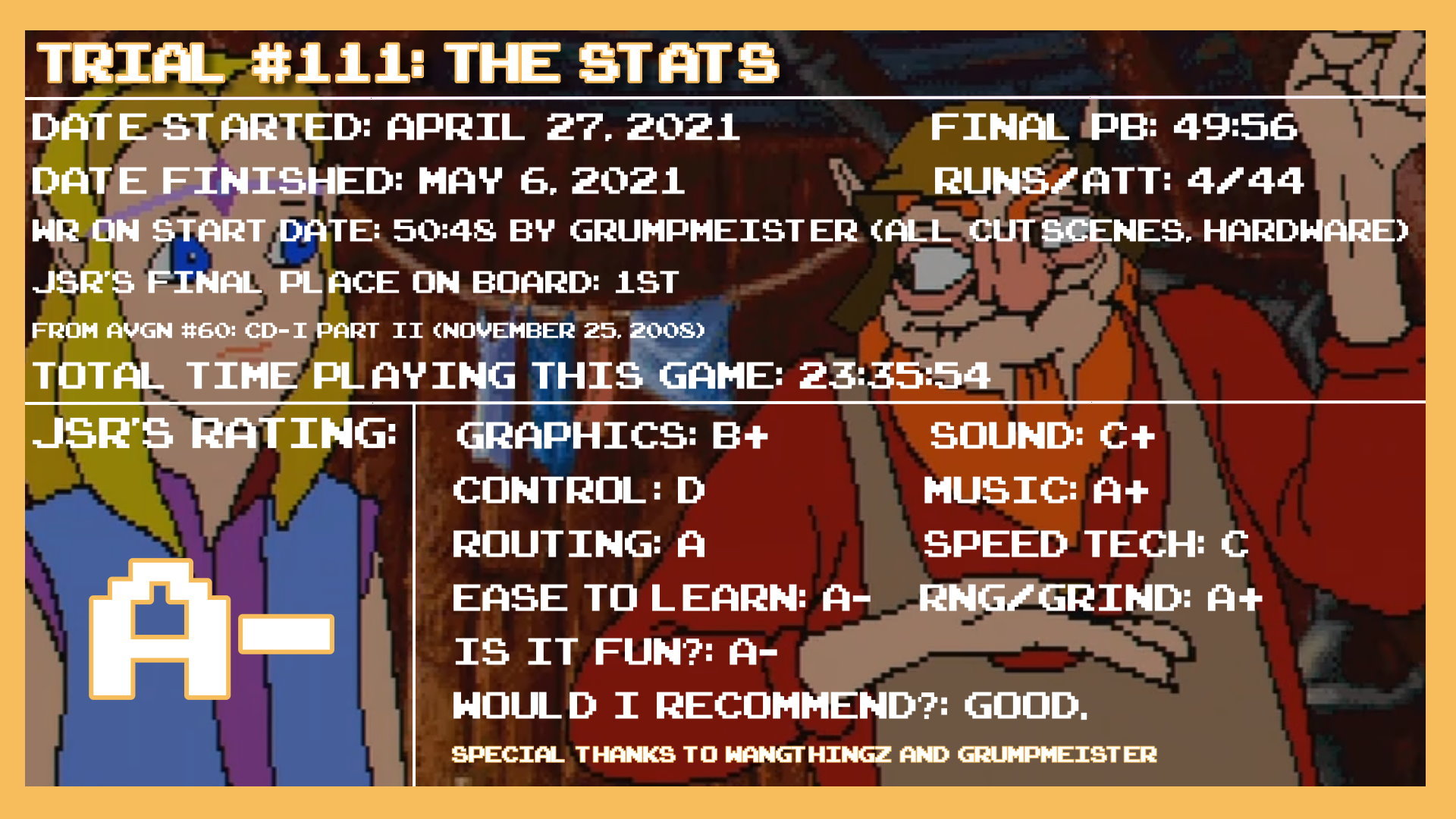